The Japanese Discovery of Chinese Fiction

The Water Margin and the Making of a National Canon 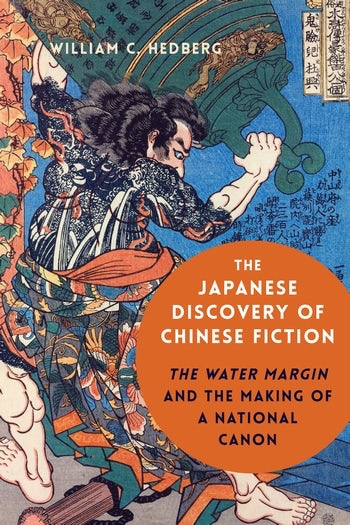 The Japanese Discovery of Chinese Fiction

The Water Margin and the Making of a National Canon

The classic Chinese novel The Water Margin (Shuihu zhuan) tells the story of a band of outlaws in twelfth-century China and their insurrection against the corrupt imperial court. Imported into Japan in the early seventeenth century, it became a ubiquitous source of inspiration for translations, adaptations, parodies, and illustrated woodblock prints. There is no work of Chinese fiction more important to both the development of early modern Japanese literature and the Japanese imagination of China than The Water Margin.

In The Japanese Discovery of Chinese Fiction, William C. Hedberg investigates the reception of The Water Margin in a variety of early modern and modern Japanese contexts, from eighteenth-century Confucian scholarship and literary exegesis to early twentieth-century colonial ethnography. He examines the ways Japanese interest in Chinese texts contributed to new ideas about literary canons and national character. By constructing an account of Japanese literature through the lens of The Water Margin’s literary afterlives, Hedberg offers an alternative history of East Asian textual culture: one that focuses on the transregional dimensions of Japanese literary history and helps us rethink the definition and boundaries of Japanese literature itself.

Concise, thoughtfully structured, and meticulously researched, The Japanese Discovery of Chinese Fiction is one of those rare books that opens up a bracingly new perspective on a well established field of study. This is essential reading for anyone interested in the literary history of Japan from the seventeenth century into the first decades of the twentieth, or in rediscovering “the literary history of Japan” itself as a concept. Michael Emmerich, author of The Tale of Genji: Translation, Canonization, and World Literature

In this erudite and sophisticated account of the Japanese appropriation of The Water Margin, Hedberg probes a series of compelling examples and raises important questions about the nature of texts, commentaries, and literary history. This excellent work embraces the marginal as a powerful hermeneutical tool to destabilize received views. Laura Moretti, author of Recasting the Past: An Early Modern Tales of Ise for Children

The Japanese Discovery of Chinese Fiction manages to be scholarly, witty, engaging, and personable all at the same time—a rare combination for a subject that is so dense and requires such intimate knowledge of a premodern literary text and the complex scholarly debates that surrounded it. Pieter Keulemans, author of Sound Rising from the Paper: Nineteenth-Century Martial Arts Fiction and the Chinese Acoustic Imagination

Remarkable in its breadth, The Japanese Discovery of Chinese Fiction illuminates how Japanese encounters with successive renditions of The Water Margin over more than three centuries served to inspire radical rethinking about ‘Chineseness’ and ‘Japaneseness’ across cultural, literary, and political registers. Hedberg especially handles the textual and linguistic complexities with expert skill. Paul Gordon Schalow, author of A Poetics of Courtly Male Friendship in Heian Japan