The Kitchen as Laboratory

Reflections on the Science of Food and Cooking 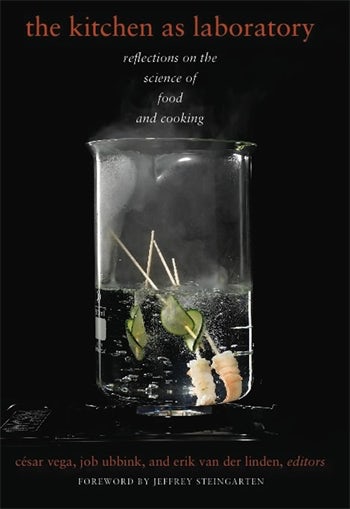 The Kitchen as Laboratory

Reflections on the Science of Food and Cooking

Eating is a multisensory experience, yet chefs and scientists have only recently begun to deconstruct food's components, setting the stage for science-based cooking. In this global collaboration of essays, chefs and scientists advance culinary knowledge by testing hypotheses rooted in the physical and chemical properties of food. Using traditional and cutting-edge tools, ingredients, and techniques, these pioneers create, and sometimes revamp, dishes that respond to specific desires and serve up an original encounter with gastronomic practice.

From the seemingly mundane to the food fantastic—from grilled cheese sandwiches, pizzas, and soft-boiled eggs to Turkish ice cream, sugar glasses, and jellified beads—the essays in The Kitchen as Laboratory cover a range of creations and their history and culture. They consider the significance of an eater's background and dining atmosphere and the importance of a chef's methods, as well as the strategies used to create a great diversity of foods and dishes. This collection will delight experts and amateurs alike, especially as restaurants rely more on science-based cooking and recreational cooks increasingly explore the physics and chemistry behind their art. Contributors end each essay with their personal thoughts on food, cooking, and science, offering rare insight into a professional's passion for playing with food.

Behind today's celebrity chefs and starred restaurants is a mostly unsung army of dedicated food and science lovers working to uncover the scientific principles that make our modern gastronomical marvels possible. In offering thirty-three highly readable and often amusing essays by warriors in this multinational kitchen army, the editors of this anthology have accomplished the great service of filling a much-needed gap in the public's understanding and appreciation of twenty-first-century culinary 'magic.' Where else can one have fun pondering the acoustics of crunchy foods or the texture of an ice cream that stretches like a rubber band? Robert Wolke, former Washington Post food columnist and author of What Einstein Told His Cook: Kitchen Science Explained

The editors of The Kitchen as Laboratory provide not just intimate and fascinating anecdotal insights but also the scientific principles that inspired them. They have created a new altar for chefs and gourmands to worship: the poetry of science. Will Goldfarb, creator of Willpowder, Experimental Cuisine Collective

The Kitchen as Laboratory provides good perspective on the scientific approach to cooking while reflecting the interests and passions of each essay's author. Readers are likely to come away with a lot of new ideas to use in the kitchen, as well as some recognition of the breadth of contemporary applications of science in the kitchen. Peter Barham, author of The Science of Cooking

The Kitchen as Laboratory is not only an in-depth study of many areas of food science, but also an entertaining read. For someone like me, who relishes understanding more about cooking from the inside out, it's heartening to see this area of literature expanded. Chef Wylie Dufresne, wd~50

Nothing is more difficult to master in the world than science itself. The Kitchen as Laboratory creates a beautiful synergy between food and science while amazingly representing difficult concepts in colloquial language. It is a powerful book. Chef José Andrés, James Beard Foundation's Outstanding Chef

Cesar Vega, Job Ubbink, and Erik van der Linden have assembled a complete document that seamlessly bridges the inherent connection of the science of cooking and the art of cooking. They have created a testament to the fact that precise understanding and open minded observation are invaluable tools for creative cooking. Kitchen as Laboratory: Reflections on the Science of Food and Cooking is a thought provoking, insightful and approachable resource for professional chefs and home cooks alike. Maxime Bilet, head chef for recipe research and development at The Cooking Lab, co-author of Modernist Cuisine

Acknowledgments
Introduction: The Case for Science Inspired by the Kitchen, by César Vega, Job Ubbink, and Erik van der Linden
1. The Science of a Grilled Cheese Sandwich, by Jennifer Kimmel
2. Sound Appeal, by Malcolm Povey
3. Mediterranean Sponge Cake, by Cristina de Lorenzo and Sergio Laguarda
4. Spherification: Faux Caviar and Skinless Ravioli, by César Vega and Pere Castells
5. Konjac Dondurma: Designing a Sustainable and Stretchable "Fox Testicle" Ice Cream, by Arielle Johnson, Kent Kirshenbaum, and Anne E. McBride
6. Stretchy Textures in the Kitchen: Insights from Salep Dondurma, by Tim J. Foster
7. Moussaka as an Introduction to Food Chemistry, by Christos Ritzoulis
8. The Sticky Science of Malaysian Dodol, by Alias A. Karim and Rajeev Bhat
9. The Perfect Cookie Dough, by Aki Kamozawa and H. Alexander Talbot
10. To Bloom or Not to Bloom, by Amelia Frazier and Richard Hartel
11. Bacon: The Slice of Life, by Timothy Knight
12. Scandinavian "Sushi": The Raw Story, by Pia Snitkjær and Louise M. Mortensen
13. Maximizing Food Flavor by Speeding Up the Maillard Reaction, by Martin Lersch
14. Lighten Up! The Role of Gases in the Culinary Experience, by Matt Golding
15. The Meringue Concept and Its Variations, by Peter Wierenga, Helen Hofstede, Erik van der Linden, Sidney Schutte, and Jonnie Boer
16. Why Does Cold Milk Foam Better? Into the Nature of Milk Foam, by Julia Maldonado-Valderrama, Peter J. Wilde, and María J. Gálvez-Ruiz
17. Ice Cream Unlimited: The Possibilities of Ingredient Pairing, by Elke Scholten and Miriam Peters
18. Egg Yolk: A Library of Textures, by César Vega
19. Ketchup as Tasty Soft Matter: The Case of Xanthan Gum, by Thomas Vilgis
20. Taste and Mouthfeel of Soups and Sauces, by John R. Mitchell
21. Playing with Sound: Crispy Crusts, by Paula Varela and Susana Fiszman
22. Baked Alaska and Frozen Florida: On the Physics of Heat Transfer, by Adam Burbidge
23. On Superb Crackling Duck Skin: An Homage to Nicholas Kurti, by Christopher Young and Nathan Myhrvold
24. Sweet Physics: Sugar, Sugar Blends, and Sugar Glasses, by Natalie Russ and Thomas Vilgis
25. Coffee, Please, but No Bitters, by Jan Groenewold and Eke Mariën
26. Turning Waste into Wealth: On Bones, Stocks, and Sauce Reductions, by Job Ubbink
27. Restructuring Pig Trotters: Fine Chemistry Supporting the Creative Culinary Process, by Jorge Ruiz and Julia Calvarro
28. Innovate: Old World Pizza Crust with New World Ingredients, by Thomas M. Tongue Jr.
29. Eating Is Believing, by Line Holler Mielby and Michael Bom Frøst
30. Molecular Gastronomy Is a Scientific Activity, by Hervé This
31. The Pleasure of Eating: The Integration of Multiple Senses, by Juan-Carlos Arboleya, Daniel Lasa, Oswaldo Oliva, Javier Vergara, and Andoni Luis-Aduriz
32. On the Fallacy of Cooking from Scratch, by César Vega and David J. McClements
33. Science and Cooking: Looking Beyond the Trends a Personal, Practical Approach, by Michael Laiskonis
Contributors
Index

César Vega holds a Ph.D. in food science and a culinary degree from Le Cordon Bleu and is research manager at Mars Botanical, a division of Mars, Inc. He has consulted with several avant-garde restaurants on aspects relating to science-based cooking, and he regularly teaches seminars on the relation between science and cooking.

Job Ubbink is a senior consultant at Food Concept and Physical Design in Flüh, Switzerland. Trained as a physical chemist and biophysicist, he has more than twelve years of R&D experience in the food industry. Along with his research on food material science and food biophysics, he is a passionate cook devoted to developing sustainable food practices and culture.

Erik van der Linden is professor of physics and physical chemistry of foods at Wageningen University. From 1991 to 1997, he worked at the interface of science and industry at Unilever Research in the Netherlands and in the United States, leading innovation projects on structural and sensory aspects of detergents, cosmetics, and foods. He earned his M.Sc. degree in theoretical physics and his Ph.D. at Leiden University and was awarded a postdoctoral fellowship at Emory University, where he focused on the stability of oil in water emulsions.