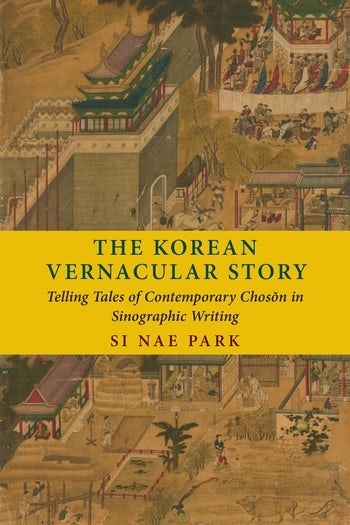 As the political, economic, and cultural center of Chosŏn Korea, eighteenth-century Seoul epitomized a society in flux: It was a bustling, worldly metropolis into which things and people from all over the country flowed. In this book, Si Nae Park examines how the culture of Chosŏn Seoul gave rise to a new vernacular literary form, with a vision of catering to a larger audience.

The vernacular story (yadam) flourished in the nineteenth century as anonymously and unofficially circulating tales by and for Chosŏn people. The Korean Vernacular Story focuses on the pivotal role that the collection Repeatedly Recited Stories of the East (Tongp’ae naksong) played in shaping yadam, analyzing the collection’s language and composition and tracing its reception and circulation. Park situates its compiler, No Myŏnghŭm, in Seoul’s cultural scene, examining how he developed a sense of belonging in the course of transforming from a poor provincial scholar to an urbane literary figure. No wrote his tales not in cosmopolitan Literary Sinitic but instead in a new medium in which Literary Sinitic is hybridized with the vernacular realities of Chosŏn society. Park contends that this linguistic innovation to represent tales of contemporary Chosŏn inspired readers not only to circulate No’s works but also to emulate and cannibalize them in creating contemporary literary modes.

The first book in English on the origins of yadam, The Korean Vernacular Story combines historical insight, textual studies, and the history of the book. By highlighting the role of negotiation with Literary Sinitic, it challenges the script (han’gŭl)-focused understanding of Korean language and literature.