The Limits of Westernization

A Cultural History of America in Turkey 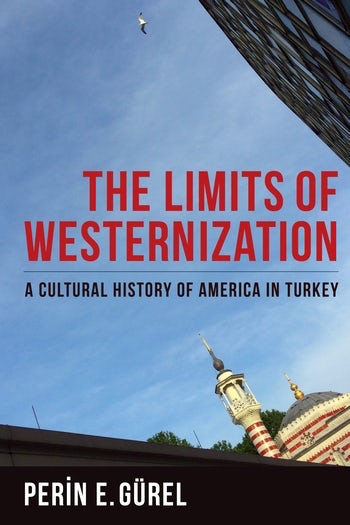 The Limits of Westernization

A Cultural History of America in Turkey

In a 2001 poll, Turks ranked the United States highest when asked: "Which country is Turkey's best friend in international relations?" When the pollsters reversed the question—"Which country is Turkey's number one enemy in international relations?"—the United States came in second. How did Turkey's citizens come to hold such opposing views simultaneously? In The Limits of Westernization, Perin E. Gürel explains this unique split and its echoes in contemporary U.S.-Turkey relations.

Using Turkish and English sources, Gürel maps the reaction of Turks to the rise of the United States as a world-ordering power in the twentieth century. As Turkey transitioned from an empire to a nation-state, the country's ruling elite projected "westernization" as a necessary and desirable force but also feared its cultural damage. Turkish stock figures and figures of speech represented America both as a good model for selective westernization and as a dangerous source of degeneration. At the same time, U.S. policy makers imagined Turkey from within their own civilization templates, first as the main figure of Oriental barbarism (i.e., "the terrible Turk"), then, during the Cold War, as good pupils of modernization theory. As the Cold War transitioned to the War on Terror, Turks rebelled against the new U.S.-made trope of the "moderate Muslim." Local artifacts of westernization—folk culture crossed with American cultural exports—and alternate projections of modernity became tinder for both Turkish anti-Americanism and resistance to state-led modernization projects.

The Limits of Westernization analyzes the complex local uses of "the West" to explain how the United States could become both the best and the worst in the Turkish political imagination. Gürel traces how ideas about westernization and America have influenced national history writing and policy making, as well as everyday affects and identities. Foregrounding shifting tropes about and from Turkey—a regional power that continues to dominate American visions for the "modernization" of the Middle East—Gürel also illuminates the transnational development of powerful political tropes, from "the Terrible Turk" to "the Islamic Terrorist."

With sophistication and mastery, Gurel offers an original perspective on how the Turkish elite and public have been refashioning images of America for their own political and social purposes for more than a century. The result is an extraordinarily well-written account of the role of culture in the international relations of both Turkey and the United States, allowing us to better grasp and critique the roots of contemporary Turkish and American narratives about identity and politics. Cemil Aydin, author of The Politics of Anti-Westernism in Asia: Visions of World Order in Pan-Islamic and Pan-Asian Thought

In The Limits of Westernization, Perin Gürel offers a multifaceted approach to interpreting the complex ways in which the United States has figured in a rapidly changing Turkey, using four key lenses through which to tell this story: political history, literary analysis, a discussion of language and humor, and gender and sexuality studies. Taken as a whole, the book illuminates how during the American century, Turkey and the United States were intertwined in ways much greater and more sophisticated than we knew. Brian T. Edwards, author of After the American Century: The Ends of U.S. Culture in the Middle East

Gurel's book is a savvy and nuanced account of the multiple meanings of America and the West in Turkish culture and politics. This is groundbreaking scholarship that uses culture—from novels to jokes to signs held up at protests—to explore how issues such as Westernization, the decline of the Ottoman empire, and US-Turkish relations were imagined in Turkey. Gurel goes beyond showing the love-hate relationship that Turks had had with the United States; she examines how cultural flows across borders created "vernacular transculturation"—spaces of interchange and transformation. The book is at once humorous and erudite, a pleasure to read and to learn from. An outstanding piece of scholarship. Melani McAlister, author of Epic Encounters: Culture, Media, and US. Interests in the Middle East since 1945

Gurel's study is not simply a 'good read' but a 'must read' in order to comprehend modern Turkey, and I might add, a contemporary America. Key Reporter

Perin Gürel’s The Limits of Westernization: A Cultural History of America in Turkey offers an innovative, compelling, and much needed addition to the literature on cultural politics in Turkey. Diplomatic History

A well-written and enjoyable example of what an interdisciplinary and skillfully bilingual cultural history can yield. Maryam Kashani, University of Illinois at Urbana-Champaign, Journal of Middle East Women's Studies