The Lives of Erich Fromm 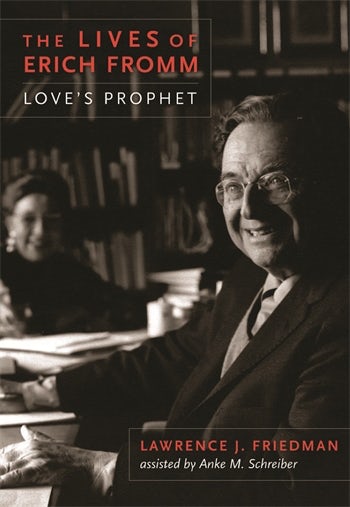 The Lives of Erich Fromm

Erich Fromm was a political activist, psychologist, psychoanalyst, philosopher, and one of the most important intellectuals of the twentieth century. Known for his theories of personality and political insight, Fromm dissected the sadomasochistic appeal of brutal dictators while also eloquently championing love—which, he insisted, was nothing if it did not involve joyful contact with others and humanity at large. Admired all over the world, Fromm continues to inspire with his message of universal brotherhood and quest for lasting peace.

The first systematic study of Fromm's influences and achievements, this biography revisits the thinker's most important works, especially Escape from Freedom and The Art of Loving, which conveyed important and complex ideas to millions of readers. The volume recounts Fromm's political activism as a founder and major funder of Amnesty International, the National Committee for a Sane Nuclear Policy, and other peace groups. Consulting rare archival materials across the globe, Lawrence J. Friedman reveals Fromm's support for anti-Stalinist democratic movements in Central and Eastern Europe and his efforts to revitalize American democracy. For the first time, readers learn about Fromm's direct contact with high officials in the American government on matters of war and peace while accessing a deeper understanding of his conceptual differences with Freud, his rapport with Neo-Freudians like Karen Horney and Harry Stack Sullivan, and his association with innovative artists, public intellectuals, and world leaders. Friedman elucidates Fromm's key intellectual contributions, especially his innovative concept of "social character," in which social institutions and practices shape the inner psyche, and he clarifies Fromm's conception of love as an acquired skill. Taking full stock of the thinker's historical and global accomplishments, Friedman portrays a man of immense authenticity and spirituality who made life in the twentieth century more humane than it might have been.

In mid-century America, a peak era for public intellectuals, Erich Fromm's psychological and sociological writings were required reading among the intelligentsia. What's more, his ideas were widely discussed by others, ranging from the millions who devoured The Art of Loving to U.S. Senators and even President John Kennedy. In this compelling biography, historian Lawrence Friedman, author of the definitive biography of psychoanalyst Erik Erikson, details the cornucopia of ideas that issued from Fromm's fertile mind as well as the fascinating and little known details of his lengthy, controversial and exceedingly full life. Howard Gardner, Hobbs Professor of Cognition and Education, Harvard Graduate School of Education

Through this thorough portrait, Love's Prophet emerges as an exemplar of enjoying an examined life to its fullest potential. Publishers Weekly

Accessible to general readers - a sympathetic, stimulating biography of one of the most influential psychologists of the 20th century. Library Journal (starred review)

A thoroughly absorbing history of the cultural and political context within which Fromm's life was lived. Vivian Gornick, Boston Review

A valuable contribution to Fromm scholarship and to American political and social history. Daniel Burston, PsycCritiques

A deep, insightful, and very human portrait of one of the great public intellectuals of the 20th century. Choice

Friedman's biography tracks Fromm through the various phases of his life in detail, providing a thickness of description that hasn't been available before. Paul Reitter, Times Literary Supplement

The most thoroughly, well-researched, and balanced biography so far of Erich Fromm... A clear and richly detailed overview of Fromm's life and work. American Historical Review

An intellectual biography of the first order. Journal of American History

An outstanding intellectual and biographical study... Lawrence Friedman effectively helps us understand the lives and transformations of Erich Fromm as analyzed in this lucid book. Society

Read an excerpt on Erich Fromm's The Art of Loving (to view in full screen, click on icon in bottom right-hand corner)

Lawrence J. Friedman is a professor in Harvard University's Mind/Brain/Behavior Initiative and a professor emeritus at Indiana University. The author of eight scholarly books and more than fifty articles, he has lectured in eleven countries and was named International Writer of the Year for 2003 by the International Biographical Center. His works include Identity's Architect: A Biography of Erik Erikson; Menninger: The Family and the Clinic; Gregarious Saints: Self and Community in American Abolitionism; and The White Savage: Racial Fantasies in the Postbellum South.