The Long Partition and the Making of Modern South Asia 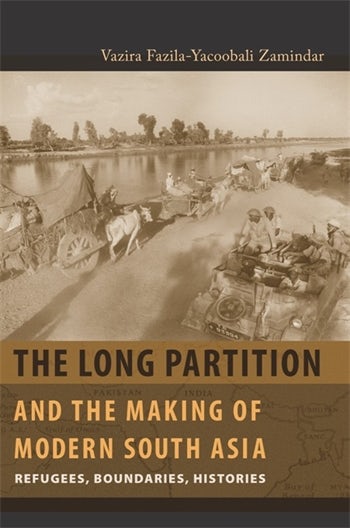 The Long Partition and the Making of Modern South Asia

Nation-states often shape the boundaries of historical enquiry, and thus silence the very histories that have sutured nations to territorial states. "India" and "Pakistan" were drawn onto maps in the midst of Partition's genocidal violence and one of the largest displacements of people in the twentieth century. Yet this historical specificity of decolonization on the very making of a nationalized cartography of modern South Asia has largely gone unexamined.

In this remarkable study based on more than two years of ethnographic and archival research, Vazira Fazila-Yacoobali Zamindar argues that the combined interventions of the two postcolonial states were enormously important in shaping these massive displacements. She examines the long, contentious, and ambivalent process of drawing political boundaries and making distinct nation-states in the midst of this historic chaos.

Zamindar crosses political and conceptual boundaries to bring together oral histories with north Indian Muslim families divided between the two cities of Delhi and Karachi with extensive archival research in previously unexamined Urdu newspapers and government records of India and Pakistan. She juxtaposes the experiences of ordinary people against the bureaucratic interventions of both postcolonial states to manage and control refugees and administer refugee property. As a result, she reveals the surprising history of the making of the western Indo-Pak border, one of the most highly surveillanced in the world, which came to be instituted in response to this refugee crisis, in order to construct national difference where it was the most blurred.

In particular, Zamindar examines the "Muslim question" at the heart of Partition. From the margins and silences of national histories, she draws out the resistance, bewilderment, and marginalization of north Indian Muslims as they came to be pushed out and divided by both emergent nation-states. It is here that Zamindar asks us to stretch our understanding of "Partition violence" to include this long, and in some sense ongoing, bureaucratic violence of postcolonial nationhood, and to place Partition at the heart of a twentieth century of border-making and nation-state formation.

A deeply moving account of the contingent category of the no-questions-asked natural citizen within the Indian and Pakistani nation-states, at birth and in their long, postnatal condition. The hurriedly-fixed national boundaries here both necessitate and entice, contain and penalize crossings. Zamindar richly documents how for some minority groups travel, kinship ties, and a national longing have to be continually bared to lay claim to citizenship within a multireligious dispensation. An unsettling work, which breaks through the chalk circles that circumscribe the retellings of 'our' separate national pasts. Shahid Amin, author of Writing Alternative Histories: A View from India

A remarkable exercise of ethno-history from below. In addition to official sources, Zamindar has collected testimonies in archives and interviewed survivors of Partition to offer an original and significant chronicle of the nation-making process in both India and Pakistan. Christophe Jaffrelot, author of The Hindu Nationalist Movement and Indian politics: 1925-1990s

This is a significant and path-breaking book and is likely to become the standard study of the subject. It will be cited authoritatively or be argued with for some time to come. Aamir Mufti, author of Enlightenment in the Colony: The Jewish Question and the Crisis of Postcolonial Culture

Zamindar puts together a history that helps clarify the story of partition and makes clear that there were no easy solutions. Lucian W. Pye, Foreign Affairs

Sets a new standard for historians, anthropologists, and political scientists interested in the cleavages wrought by bureaucratic efforts to create, extend, or redefine modern territorial states.... It is not the only book on the partition of India and Pakistan to emerge in recent years. But it is surely one of the best. Matthew J. Nelson, Asian Affairs

Zamindar's analysis... is remarkable for what it has to say about India and Pakistan, but valuable too because it brings Partition back into the mainstream of 20th-century history. Siddhartha Deb, London Review of Books

Extraordinary human violence and mass displacements call for unusual skills of retelling and witnessing. Zamindar has these in plenty and has given us a redeeming social history that is not merely rich in ethnographic detail and biography but offers a reflexive methodology that passionately demonstrates why modern states are always complicit when it comes to holocaust and genocide. Harjot Oberoi, Pacific Affairs

This book is one of the most brilliant and nuanced of the many works about the Partition of South Asia that have emerged in recent years. Yasmin Khan, Journal of Interdisciplinary History

Zamindar's study stands out for the originality of its conception and its importance in making sense of this seminal event. David Gilmartin, H-Asia

[A]uthor Zamindar provides a fascinating narrative of Southern Asia in the twentieth century with an educational and thoughtful read. Midwest Book Review