The Man Who Couldn't Die

The Tale of an Authentic Human Being 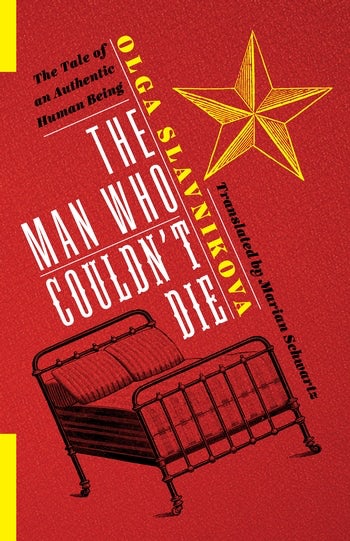 The Man Who Couldn't Die

The Tale of an Authentic Human Being

In the chaos of early-1990s Russia, the wife and stepdaughter of a paralyzed veteran conceal the Soviet Union’s collapse from him in order to keep him—and his pension—alive until it turns out the tough old man has other plans. Olga Slavnikova’s The Man Who Couldn’t Die tells the story of how two women try to prolong a life—and the means and meaning of their own lives—by creating a world that doesn’t change, a Soviet Union that never crumbled.

After her stepfather’s stroke, Marina hangs Brezhnev’s portrait on the wall, edits the Pravda articles read to him, and uses her media connections to cobble together entire newscasts of events that never happened. Meanwhile, her mother, Nina Alexandrovna, can barely navigate the bewildering new world outside, especially in comparison to the blunt reality of her uncommunicative husband. As Marina is caught up in a local election campaign that gets out of hand, Nina discovers that her husband is conspiring as well—to kill himself and put an end to the charade. Masterfully translated by Marian Schwartz, The Man Who Couldn’t Die is a darkly playful vision of the lost Soviet past and the madness of the post-Soviet world that uses Russia’s modern history as a backdrop for an inquiry into larger metaphysical questions.

Darkly sardonic . . . . oddly timely, for there are all sorts of understated hints about voter fraud, graft, payoffs, and the endless promises of politicians who have no intention of keeping them. It is also deftly constructed, portraying a world and a cast of characters who are caught between the orderly if drab world of old and the chaos of the 'new rich' in a putative democracy. . . . Slavnikova is a writer American readers will want to have more of. Kirkus Reviews (starred review)

Rather than celebrate the crumbling of walls, Slavnikova’s novel shows us all the Lenin statues still in place. It portrays a culture chained to old realities, unable to establish a new understanding of itself. This is a funhouse mirror worth looking into, especially in today’s United States with its alternative facts, unpoetic assertions, and morbid relationship with the past. Leeore Schnairsohn, Los Angeles Review of Books

The Man Who Couldn’t Die, lucidly translated by Marian Schwartz, will resound with American readers. Bristling with voter fraud, fake news, and the cozy top-and-tail of media moguls and politicians, Slavnikova’s book is fluent in new language of the damaged reality principle. Olivia Parkes, The Baffler

The Man Who Couldn’t Die is a Gogolian portrait of the Kharitonovs, a Moscow family who 'had not been handed any party favors at capitalism’s kiddie party' after the fall of the Soviet Union. Natasha Randall, Times Literary Supplement

The Man Who Couldn’t Die is an overlooked masterpiece of post-Soviet prose by one of contemporary Russia’s most important authors. It reveals how Slavnikova’s descriptions (and Schwartz’s English equivalent) belong alongside those of Vladimir Nabokov, Iurii Olesha, and Nikolai Gogol as truly revolutionary in Russian prose. Benjamin Sutcliffe, Miami University

Introduction by Mark Lipovetsky
The Man Who Couldn’t Die

Olga Slavnikova was born in 1957 in Sverdlovsk (now Ekaterinburg). She is the author of several award-winning novels, including 2017, which won the 2006 Russian Booker prize and was translated into English by Marian Schwartz (2010), and Long Jump, which won the 2018 Yasnaya Polyana Award.

Marian Schwartz translates Russian contemporary and classic fiction, including Tolstoy’s Anna Karenina, and is the principal translator of Nina Berberova.