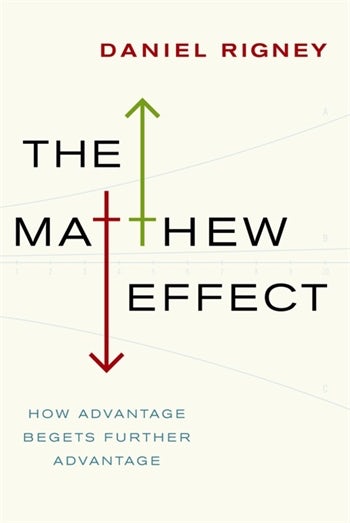 The old saying does often seem to hold true: the rich get richer while the poor get poorer, creating a widening gap between those who have more and those who have less. The sociologist Robert K. Merton called this phenomenon the Matthew effect, named after a passage in the gospel of Matthew. Yet the more closely we examine the sociological effects of this principle, the more complicated the idea becomes. Initial advantage doesn't always lead to further advantage, and disadvantage doesn't necessarily translate into failure. Does this theory need to be revisited?

Merton's arguments have significant implications for our conceptions of equality and justice, and they challenge our beliefs about culture, education, and public policy. His hypothesis has been examined across a variety of social arenas, including science, technology, politics, and schooling, to see if, in fact, advantage begets further advantage. Daniel Rigney is the first to evaluate Merton's theory of cumulative advantage extensively, considering both the conditions that uphold the Matthew effect and the circumstances that cause it to fail. He explores whether growing inequality is beyond human control or disparity is socially constructed and subject to change. Reexamining our core assumptions about society, Rigney causes us to rethink the sources of inequity.

Rigney's summary of the latest research findings should contribute to a much needed discussion between policy makers, social scientists, and the general public. Publishers Weekly

Daniel Rigney, a sociologist at St. Mary's University in San Antonio, was director of the university's honors program for twenty-three years. With an interest in social theory, the sociology of religion and culture, and social justice issues, he is the author of The Metaphorical Society: An Invitation to Social Theory and is married to the historian Alida Metcalf.