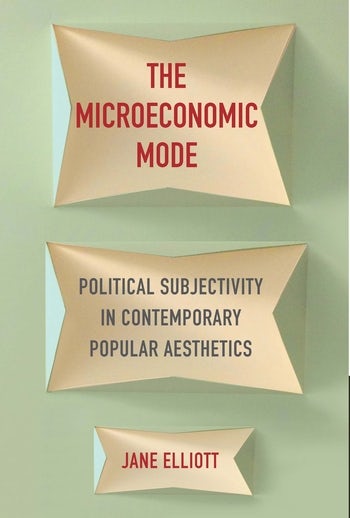 From The Road to Game of Thrones, across works as seemingly different as Gone Girl and Saw, literature, film, and television have become obsessed with the intersection of survival and choice. When the trapped rock-climber hero of 127 Hours is confronted with self-amputation or death, it is only a particularly blunt example of an omnipresent set-up. In real-life settings or fantastical games, protagonists find themselves confronting extreme scenarios with life-or-death consequences, forced to make torturous either-or choices in stripped-down, brutally stark environments.

Jane Elliott identifies and analyzes this new and distinctive aesthetic phenomenon, which she calls “the microeconomic mode.” Through close readings of its narratives, tropes, and concepts, she traces the implicit theoretical and political claims conveyed by this combination of abstraction and extremity. In the microeconomic mode, humans isolated from any forms of social organization operate within a mini-economy of costs and benefits, gains and losses, measured in the currency of life. Elliott reads the key concepts that emerge from this aesthetic—life-interest, sovereign capture, and binary life—in relation to biopolitics and natural law theory, becoming and the control society, and primitive accumulation in racial capitalism. The microeconomic mode interrogates the destruction of the liberal political subject, but what it leaves in its place is as disturbing as it is radically new. Going beyond the question of neoliberalism in literature, The Microeconomic Mode combines revelatory close readings of key literary and popular texts with significant theoretical interventions to identify how an aesthetics of choice has reshaped our contemporary understanding of what it means to be human.

The Microeconomic Mode is a searing investigation of the dominant imagination of life stealthily unfolding across genres of contemporary literature and popular media. With great finesse and rigor, Jane Elliott details the new subjective protocols that aim to reconcile us to a world where life can only exist at the expense of other lives, offering us indispensable critical terms for understanding the perniciousness of this emergent mode of being human. A precise, illuminating, damning reading of our times. Neferti X. M. Tadiar, author of Things Fall Away: Philippine Historical Experience and the Makings of Globalization

This book offers a bold new paradigm that grasps what is so ungraspable about the contemporary moment. Novels in “the microeconomic mode” reduce experience to an operative model that requires individuals to perform cold-blooded cost-benefit analyses and choose between two equally horrific options. The pervasiveness of fiction that hews to this model provides the basis for Elliott’s groundbreaking claim—namely, that the intense suffering accompanying these decisions relocates the liberal individual within a zero sum game where we find ourselves calculating our life interest in relation to the cost of someone else’s life. Nancy Armstrong, Duke University

What if the stark “bare life” plots and post-apocalyptic narratives proliferating in contemporary U.S. fiction were less reflections of post-humanist thought than of microeconomics—representations in which worlds become reduced to models and individuals to cost/benefit decisions rendered inseparable from the issue of survival? In this provocative book, Jane Elliott brings her incisiveness and originality as a feminist theorist of the contemporary to shed light on why this at once radically abstract and visceral aesthetic and the image of “suffering agency” it implies has become so portable across political perspectives. The Microeconomic Mode is an outstanding work of literary and cultural theory. Sianne Ngai, University of Chicago

The Microeconomic Mode identifies a distinct political and aesthetic formation that is currently playing out across a range of popular literary, cinematic, and televisual works in the late-twentieth and early-twenty-first century Anglophone West. It traces the emergence of that formation from its origins in eighteenth-century liberal political theory to the contemporary neoliberal context, and describes its many iterations. Elliott's analysis of this terrifying aesthetic mode promises nothing less than a new understanding of our political present. Timothy Bewes, Brown University

Jane Elliott is senior lecturer in English at King’s College London. She is the author of Popular Feminist Fiction as American Allegory: Representing National Time (2008) and coeditor of Theory After “Theory” (2011).