A Century of Politics and Resistance 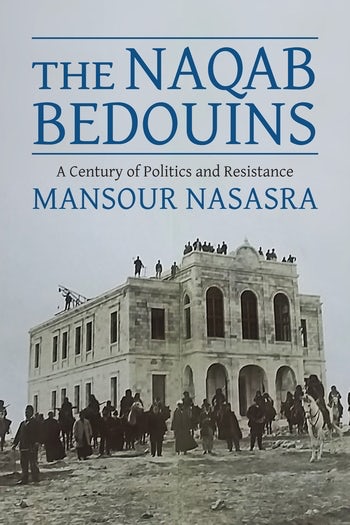 A Century of Politics and Resistance

Conventional wisdom positions the Bedouins in southern Palestine and under Israeli military rule as victims or passive recipients. In The Naqab Bedouins, Mansour Nasasra rewrites this narrative, presenting them as active agents who, in defending their community and culture, have defied attempts at subjugation and control. The book challenges the notion of Bedouin docility under Israeli military rule and today, showing how they have contributed to shaping their own destiny.

The Naqab Bedouins represents the first attempt to chronicle Bedouin history and politics across the last century, including the Ottoman era, the British Mandate, Israeli military rule, and the contemporary schema, and document its broader relevance to understanding state-minority relations in the region and beyond. Nasasra recounts the Naqab Bedouin history of political struggle and resistance to central authority. Nonviolent action and the strength of kin-based tribal organization helped the Bedouins assert land claims and call for the right of return to their historical villages. Through primary sources and oral history, including detailed interviews with local indigenous Bedouins and with Israeli and British officials, Nasasra shows how this Bedouin community survived strict state policies and military control and positioned itself as a political actor in the region.

In The Naqab Bedouins, Nasasra uncovers marvelous material that illuminates the history of the Bedouins of southern Palestine and challenges prevailing understandings of their politics and social experiences. The long historical perspective that takes us from Ottoman times to the present relies on Nasasra's prodigious original research and superb documentation to present a comprehensive and detailed picture of this Bedouin community struggling against state power. Lila Abu-Lughod, Joseph L. Buttenweiser Professor of Social Science, Columbia University

What makes Nasasra's study of the Bedouins in Israel especially interesting is the close parallel with the experience of Bedouin communities throughout the Middle East. Refreshingly, he avoids romanticizing the Bedouins while focusing on their resistance as an indigenous people to policies that are, in effect, if not always in design, anti-nomadic. His comparative, historicized approach, moreover, offers an intriguing entry to wider debates about different forms of nationalism and identity in Arab societies. Yezid Sayigh, senior fellow, Carnegie Middle East Center

A book like no other. Nasasra tells the riveting story of the Palestinian Bedouins of the Naqab and Bi?r al-Saba? from the late Ottoman era until today, opening up a new vista for understanding the place of indigeneity in the Middle East and highlighting resistance and power relations that shadow the lives of the Naqab Bedouins. Particularly strong is his discussion on indigeneity scholarship in reference to international law. Nasasra has not just written a book on Bedouins—he has given a voice to the most marginalized among the Palestinians in Israel. Larbi Sadiki, Qatar University

In his readable and well-sourced account, Nasasra shows that the Bedouin community has constantly challenged power, employing every possible mechanism to affirm its right to place, the continuation of its cultural identity and the community’s right to political voice. Dina Matar, LSE Middle East Centre Blog

A welcome challenge to the conventional wisdom that the Bedouin in southern Palestine were passive victims under Israeli military rule. . . . Recommended. Choice

A historically and analytically rich monograph that adds considerably to scholarly understanding of the Bedouin both in Mandate-era Palestine and the state of Israel. Kristian Coates Ulrichsen, International Affairs

This is the most comprehensive existing survey of the Bedouin Arab tribes of the Naqab desert in southern Palestine over the last century...[A] must read for anyone eager to look beyond the usual stereotypes and socio-political assumptions concerning the medium of colonial and post-colonial resistance. Abdullah Drury, The Muslim World Book Review

The Naqab Bedouins is a well-documented ethnohistory that provides an overview of the past events and people that have come to define popular Bedouin history in the twenty-first century. Emilie Le Febvre, Anthropos

I strongly recommend this book. The Naqab Bedouin enriches a growing critical scholarship that challenges the long-used modernization framework and its tendency to focus on Bedouin culture, folklore, and tribal law over the modalities of resistance and identity in constant negotiation as articulated by Bedouin voices themselves. It will be particularly useful to students and professors of history, sociology, anthropology, and political science who are interested in the Middle East, Palestine, Israel, tribal and indigenous communities, and modern state making. Ahmad Amara, International Journal of Middle East Studies

Mansour Nasasra is lecturer in Middle East politics and international relations at the Department of Politics and Government, Ben Gurion University of the Negev. Nasasra has taught at the University of Exeter, Plymouth University, and the Hebrew University. He was a research fellow at the Council for British Research in the Levant and has been a recipient of British Academy grants. Nasasra is coeditor of The Naqab Bedouin and Colonialism: New Perspectives (2015).