The Nose and Other Stories 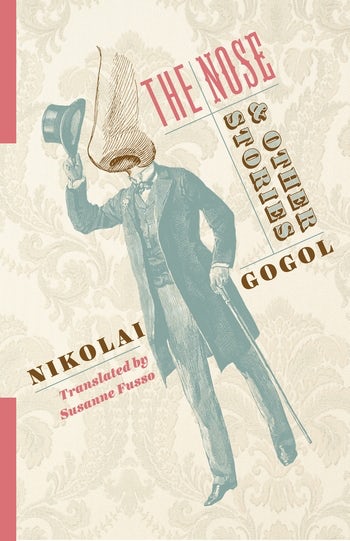 The Nose and Other Stories

Nikolai Gogol’s novel Dead Souls and play The Government Inspector revolutionized Russian literature and continue to entertain generations of readers around the world. Yet Gogol’s peculiar genius comes through most powerfully in his short stories. By turns—or at once—funny, terrifying, and profound, the tales collected in The Nose and Other Stories are among the greatest achievements of world literature.

These stories showcase Gogol’s vivid, haunting imagination: an encounter with evil in a darkened church, a downtrodden clerk who dreams only of a new overcoat, a nose that falls off a face and reappears around town on its own, outranking its former owner. Written between 1831 and 1842, they span the colorful setting of rural Ukraine to the unforgiving urban landscape of St. Petersburg to the ancient labyrinth of Rome. Yet they share Gogol’s characteristic obsessions—city crowds, bureaucratic hierarchy and irrationality, the devil in disguise—and a constant undercurrent of the absurd. Susanne Fusso’s translations pay careful attention to the strangeness and wonder of Gogol's style, preserving the inimitable humor and oddity of his language. The Nose and Other Stories reveals why Russian writers from Dostoevsky to Nabokov have returned to Gogol as the cornerstone of their unparalleled literary tradition.

The first major English translation of his stories in more than twenty years, The Nose and Other Stories captures Gogol’s humor and complexity brilliantly. This volume will prove to be a great read for students and Russian literature enthusiasts alike. Bruce Holl, Trinity University

Nikolai Gogol (1809–1852) was born in Ukraine and achieved literary success in St. Petersburg. He spent some of his most productive years in Rome. Upon his return to Russia, he struggled unsuccessfully to write a redemptive sequel to Dead Souls.

Susanne Fusso is Marcus L. Taft Professor of Modern Languages and professor of Russian, East European, and Eurasian studies at Wesleyan University. Her many books include Designing Dead Souls: An Anatomy of Disorder in Gogol (1993), and she has translated Russian writers including Sergey Gandlevsky.