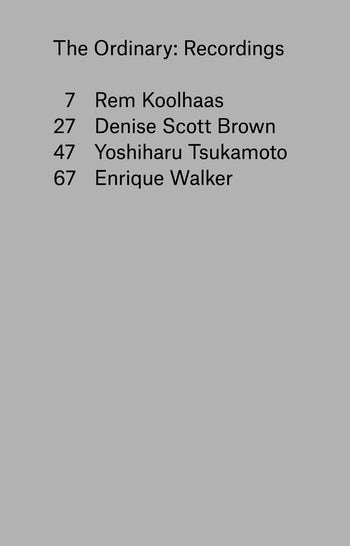 Since the beginning of the century, the field of architecture has fervently turned its attention to documenting the contemporary urban condition. Every city has been examined as a repository of architectural concepts, scrutinized as an urban manifesto, and recorded as a series of found objects.

The Ordinary articulates a potential genealogy for this practice and for the genre of books that derived from it. Organized around conversations with the authors of three seminal texts that document the city—Rem Koolhaas on Delirious New York, Denise Scott Brown on Learning from Las Vegas, and Yoshiharu Tsukamoto on Made in Tokyo—this volume traces the history of these “books on cities” by examining the material they recorded, the findings they established, the arguments they advanced, and the projects they promoted. These conversations also question the assumptions underlying this practice and whether in its ubiquity it still remains a space of opportunity.

Rem Koolhaas, Denise Scott Brown, and Yoshiharu Tsukamoto are each among the most renowned architects of their generations and are collectively responsible for some of the discipline's most important books on cities.

Enrique Walker is associate professor at the Graduate School of Architecture, Planning, and Preservation at Columbia University, where he also directs the Advanced Architectural Design program. His publications include Tschumi on Architecture: Conversations with Enrique Walker and Lo Ordinario.