The Origins of the Cultural Revolution 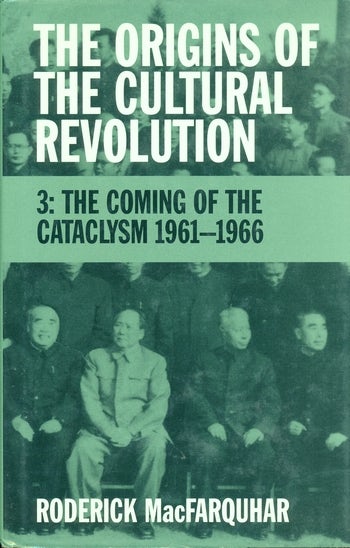 The Origins of the Cultural Revolution

This is the final volume in a trilogy that examines the politics, personalities, economics, culture, and international relations of China from the mid-1950s to the mid-1960s. It seeks to answer the central question: Why did Chairman Mao Zedong launch the Cultural Revolution (1966–76), which plunged China into chaos and almost destroyed its Communist Party?

The Coming of the Cataclysm starts with the great famine of the early 1960s, which resulted in tens of millions of deaths and set in train a series of emergency measures that increasingly divided Mao from his comrades-in-arms. His anger that they were prepared to adopt "capitalist" methods to rescue the country was sharpened by his belief that Moscow had actually gone capitalist and sold out to the "imperialist" West. From 1961 to 1966, the period covered by this volume, the increasingly urgent question for Mao was how to prevent a similar revolutionary degeneration in China. The Cultural Revolution was his answer.

Drawing upon new evidence from Party documents, personal interviews, books, and journals, MacFarquhar details the growing rift between Mao and his colleagues as they attempted to cope with domestic privation and an increasingly hostile international environment—until the Chairman finally decided to smash the unity of the Yan'an Round Table by unleashing society against the party-state.

An awe-inspiring work of historical scholarship.... MacFarquhar has exposed the inner workings of Mao's China with a depth of detail that raises the standards for Sinological research. Lucien W. Pye, Harvard Magazine

With this volume, Roderick MacFarquhar completes his monumental trilogy on the origins of the Cultural Revolution in China. The volume...surpasses the earlier efforts and marks the probable definitive treatment of Chinese elite political history until CCP archives become fully available. Journal of Asian Studies

All in all, readers from several disciplines will welcome the appearance of this volume by one of the most dedicated China watchers. Meanwhile we look forward to the author's collaborative work on the Cultural Revolution itself. Dali Yang, University of Chicago, China Review International

This great intellectual effort, under the auspices of the Royal Institute of International Affairs, has taken more than 25 years to complete, and has produced the most sparkling gem of modern Sinology.... MacFarquhar's careful but devastating prose and his insights make... other books seem shallow by comparison. The Economist

I: The Third Bitter Year
1. The Central Committe's Ninth Plenum
2. Emergency Measures
3. A New Course in the Countryside
4. A Plethora of Plans
5. Reds and Experts
6. China's Isolation
II: False Down
7. The Seven Thousand Cadres Conference
8. Economic Crunch
9. The Dispute over Collectivization
10. Resuscitating the United Front
11. The Curious Case of the 'Three-Family Village'
III: Class Struggle
12. Mao Changes the Signals
13. War in the Himalayas, Crisis in the Caribbean
14. Mao in Charge
15. The Socialist Education Movement
16. The Sino-Soviet Rupture and the Vietnam War
IV: The End of the Yan'an Round Table
17. Woman Warrior
18. From Grey Eminence to Red Leader
19. Mao Stoops to Conquer
20. The Coming of the Cataclysm

Roderick MacFarquhar, a former British Member of Parliament, is Leroy B. Williams Professor of History and Political Science at Harvard, chairman of its Government Department, and a research associate of the Fairbank Center for East Asian Research.