The Perils of the One 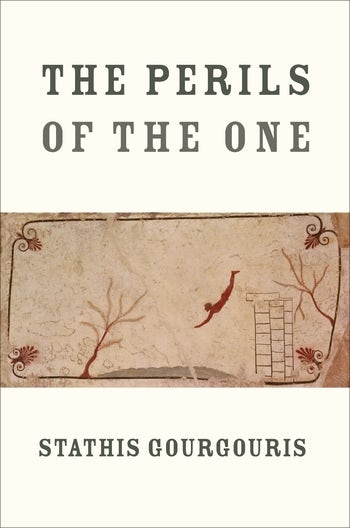 The Perils of the One

From the earliest times, societies have been seduced by the temptation of unitary thinking. Recognizing the vulnerability of existence, people and cultures privilege regimes that confer authority on a single entity, a sovereign ruler, a transcendental deity, or an Event, which they embrace with unquestioned devotion. Such obsessions precipitate contempt for the worldliness of real bodies in real time and refusal of responsibility and agency.

In The Perils of the One, Stathis Gourgouris offers a philosophical anthropology that confronts the legacy of “monarchical thinking”: the desire to subjugate oneself to unitary principles and structures, whether political, moral, theological, or secular. In wide-ranging essays that are at once poetic and polemical, intellectual and passionate, Gourgouris reads across politics and theology, literary and art criticism, psychoanalysis and feminism in a critique of both political theology and the metaphysics of secularism. He engages with a range of figures from the Apostle Paul and Trinitarian theologians, to La Boétie, Schmitt, and Freud, to contemporary thinkers such as Clastres, Said, Castoriadis, Žižek, Butler, and Irigaray. At once a broad perspective on human history and a detailed examination of our present moment, The Perils of the One offers glimpses of what a counterpolitics of autonomy would look like from anarchic subjectivities that refuse external ideals, resist the allure of command and obedience, and embrace otherness.

The Perils of the One is an exhilarating volume, an extended and variegated exercise in 'secular criticism' grounded on a deep erudition and poetic sensibility. This book is much more than an engagement with thinkers and scholars; it is a rich, exemplary reflection on the meaning of criticism and politics. Gil Anidjar, author of Blood: A Critique of Christianity

The Perils of the One demonstrates Stathis Gourgouris's sustained commitment to extending the bounds of secular criticism, a term originally coined by Edward Said which acquires acute political dimensions in Gourgouris's expert reworking. In addition to the critique of religion, Gourgouris's secular criticism addresses monistic belief structures and practices common to monotheism, monarchy, monolingualism, sovereign exceptionalism, the singular 'Event,' the exclusionary community. To resist 'the One,' to avoid succumbing to the transcendentalism of political theology in its various guises (including the individual's freely contracted self-subjugation), Gourgouris takes us on a journey through counter-traditions; from polytheistic (and polyarchic) Hellenism, to cosmotheism, to Freud's psychoanthropology in Moses and Monotheism. A crucial reference for humanists and scholars of the politics of religion, The Perils of the One calls forth active engagement with poetics understood as a way of living with secular conviction. Gourgouris gives us life lessons: not instructions on how to live, but something more like music lessons—an invitation to compose with the material pleasures of aesthetic experience and everyday coexistence. Emily Apter, author of Unexceptional Politics: On Obstruction, Impasse and the Impolitic

This collection of perfectly rewritten and ordered essays marks an important step in Stathis Gourgouris’ bold deconstruction of every form of sacralization in our political discourses and practices. Following on the pathbreaking theories of Castoriadis and Clastres, but also drawing inspiration from Freud, and polemicizing with Žižek, Badiou, and other contemporary masters, it is in the 'monotheistic' confusion of unity and community that he sees the permanent origin of an injection of transcendence, therefore death, into our projects of emancipation. If ever a radical form of secular criticism was possible, this is it. Étienne Balibar, author of Secularism and Cosmopolitanism: Critical Hypotheses on Religion and Politics

As an eminent metaphysical and theological concept, the One, a long tradition of philosophical reflection teaches us, has as at least as many difficulties as does its counterpart, which would be 'the many.' Taken in isolation, the latter notion even makes little sense, but its predicament was never one of predication, pure and simple, alone. The One, by contrast, was always self-contradictory, not to mention self-congratulatory, and its imposition—both in matters ontological and political—nothing short of disastrous. Out of the 'One' no 'many' ever really resulted and out of many, come to think of it, hardly a 'one.' Analyzing these perils, Stathis Gourgouris here adds a new, deeply engaging, and thorough study to a rich body of earlier writings, probing a notion that still haunts our thinking and acting. Hent de Vries, coeditor of Love and Forgiveness for a More Just World

Gourgouris’s complex writing requires a high level of specialized knowledge, but scholars in religion and philosophy will find this stimulating. Publishers Weekly

Preface
Acknowledgments
1. Transformation, Not Transcendence
2. The Lesson of Pierre Clastres
3. On Self- Alteration
4. Žižek’s Realism
5. Paul’s Greek
6. Every Religion Is Idolatry
Notes
Index

Stathis Gourgouris is professor of classics, English, and comparative literature and society at Columbia University. He is the author of several books, including Dream Nation (1996), Does Literature Think? (2003), and Lessons in Secular Criticism (2013).