The Poetics of the Everyday 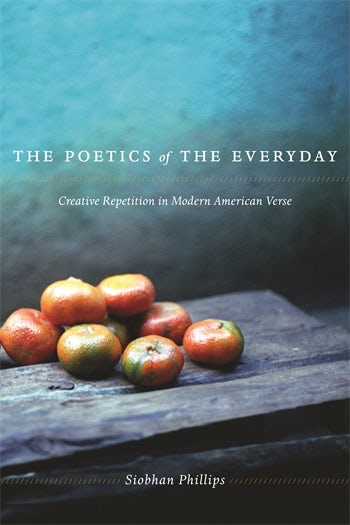 The Poetics of the Everyday

Wallace Stevens once described the "malady of the quotidian," lamenting the dull weight of everyday regimen. Yet he would later hail "that which is always beginning, over and over"recognizing, if not celebrating, the possibility of fresh invention.

Focusing on the poems of Wallace Stevens, Robert Frost, Elizabeth Bishop, and James Merrill, Siobhan Phillips positions everyday time as a vital category in modernist aesthetics, American literature, and poetic theory. She eloquently reveals how, through particular but related means, each of these poets converts the necessity of quotidian experience into an aesthetic and experiential opportunity. In Stevens, Phillips analyzes the implications of cyclic dualism. In Frost, she explains the theoretical depth of a habitual "middle way." In Bishop's work, she identifies the attempt to turn recurrent mornings into a "ceremony" rather than a sentence, and in Merrill, she shows how cosmic theories rely on daily habits.

Phillips ultimately demonstrates that a poetics of everyday time contributes not only to a richer understanding of these four writers but also to descriptions of their era, estimations of their genre, and ongoing reconfigurations of the issues that literature reflects and illuminates.

A compelling study of the function of "everyday time" in the works of Robert Frost, Wallace Stevens, Elizabeth Bishop, and James Merril... Recommended. Choice

Siobhan Phillips earned her Ph.D. at Yale University and is a junior fellow at the Harvard Society of Fellows. Her writing has appeared in PMLA, Prospect, and Hudson Review.