The Political Impossibility of Modern Counterinsurgency 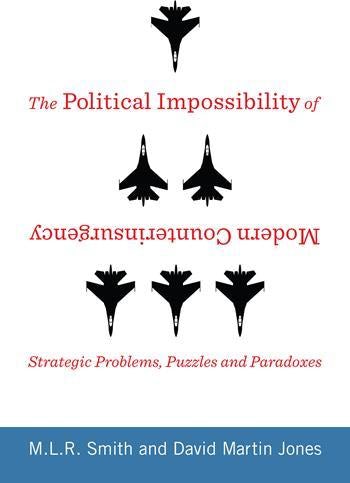 The Political Impossibility of Modern Counterinsurgency

The counterinsurgency (COIN) paradigm dominates military and political conduct in contemporary Western strategic thought. It assumes future wars will unfold as "low intensity" conflicts within rather than between states, requiring specialized military training and techniques. COIN is understood as a logical, effective, and democratically palatable method for confronting insurgency—a discrete set of practices that, through the actions of knowledgeable soldiers and under the guidance of an expert elite, creates lasting results.

Through an extensive investigation into COIN's theories, methods, and outcomes, this book undermines enduring claims about COIN's success while revealing its hidden meanings and effects. Interrogating the relationship between counterinsurgency and war, the authors question the supposed uniqueness of COIN's attributes and try to resolve the puzzle of its intellectual identity. Is COIN a strategy, a doctrine, a theory, a military practice, or something else? Their analysis ultimately exposes a critical paradox within COIN: while it ignores the vital political dimensions of war, it is nevertheless the product of a misplaced ideological faith in modernization.

Concise, impeccably well structured and penetrating, this book provides the most insightful analysis yet of the theoretical underpinnings of insurgency warfare, and what this means for contemporary armed conflict. Huw Bennett, Aberystwyth University

As the 'success' of counterinsurgency in Iraq and Afghanistan is increasingly called into question, The Political Impossibility of Modern Counterinsurgency offers valuable insights that are likely to be both timely and enduring. The authors demonstrate with admirable lucidity that 21st century counterinsurgency has often been a catechism rather than a real strategy, with technocratic and modernizing zeal frequently blinding its practitioners to historical and contemporary reality. Vital for those seeking to understand the past, present, and future of counterinsurgency in theory and practice. Austin Long, Columbia University

A penetrating study... The Political Impossibility of Modern Counterinsurgency shows itself to be confident and decisive in its sceptical outlook, and a powerful and authoritative contribution to the literature of counter-insurgency. Survival

Read an excerpt from the first chapter, "What is Counterinsurgency Meant to Counter?: The Puzzle of Insurgency":

M. L. R. Smith is professor of strategic theory in the Department of War Studies at King's College, University of London. Among his publications are Fighting for Ireland? The Military Strategy of the Irish Republican Movement and The Strategy of Terrorism: How It Works and Why It Fails.

David Martin Jones is associate professor in the School of Political Science and International Studies at the University of Queensland, Brisbane. His publications include Political Development in Pacific Asia, The Image of China in Western Social and Political Thought, and, with M. L. R. Smith, ASEAN and East Asian International Relations: Regional Delusion and Sacred Violence: Political Religion in a Secular Age.