The Power of Tolerance 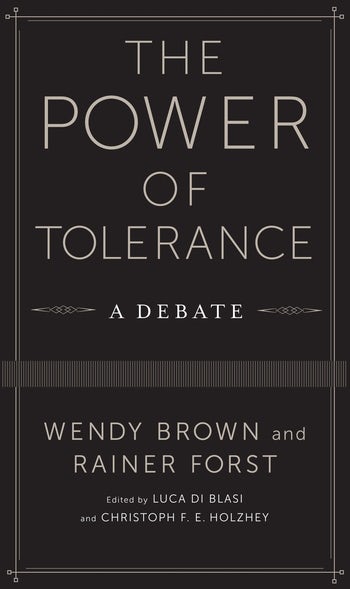 The Power of Tolerance

We invoke the ideal of tolerance in response to conflict, but what does it mean to answer conflict with a call for tolerance? Is tolerance a way of resolving conflicts or a means of sustaining them? Does it transform conflicts into productive tensions, or does it perpetuate underlying power relations? To what extent does tolerance hide its involvement with power and act as a form of depoliticization?

Wendy Brown and Rainer Forst debate the uses and misuses of tolerance, an exchange that highlights the fundamental differences in their critical practice despite a number of political similarities. Both scholars address the normative premises, limits, and political implications of various conceptions of tolerance. Brown offers a genealogical critique of contemporary discourses on tolerance in Western liberal societies, focusing on their inherent ties to colonialism and imperialism, and Forst reconstructs an intellectual history of tolerance that attempts to redeem its political virtue in democratic societies. Brown and Forst work from different perspectives and traditions, yet they each remain wary of the subjection and abnegation embodied in toleration discourses, among other issues. The result is a dialogue rich in critical and conceptual reflections on power, justice, discourse, rationality, and identity.

Brown and Forst are the authors of two of the most important books on tolerance to be published in the last decade. This book not only offers an overview of their positions but also puts these two authors into a surprisingly productive dialogue. The Power of Tolerance is a rich and compelling exchange between two of the best political theorists working today. Amy Allen, Dartmouth College

In today's world of divisive politics and divided civilizations, what could be more germane than a spirited debate on the topic of tolerance conducted by two of the world's most respected political theorists? The Power of Tolerance records for those of us who could not be there in person the searching and profound but also fast-paced and witty exchange of ideas between two giants of contemporary political thought: Wendy Brown and Rainer Forst. Ranging from historical insights into the origins of our current concepts to provocative examples from the spheres of culture, sexuality, and religion, what this exchange reveals above all is how deeply complex tolerance is, and how that most laudable goal of generating a politics of tolerance adequate to the problems of our time can only be achieved by running the gauntlet of that concept's inevitable imbrication with the discourses of power. William Egginton, Andrew W. Mellon Professor in the Humanities, The Johns Hopkins University

It is almost half a century since Robert Paul Wolff, Barrington Moore Jr. and Herbert Marcuse published the radical provocation to liberal orthodoxy they called A Critique of Pure Tolerance, a seminal text for the New Left. Two of today's most eminent political theorists, the American Wendy Brown and the German Rainer Forst, pick up where they left off, debating with far more light than heat the abiding power--to do both good and ill--of a concept that remains central to Western political culture. Martin Jay, University of California, Berkeley

In recent years the discourse and practice of tolerance have been subjected to sustained critique because of the way they subtly constitute and discipline those who are being tolerated. Brown and Forst have been important voices in opening up this topic. But they differ in how we should think about the value of tolerance after critique. Their debate generates a little heat and a large amount of light. The participants disagree, but they keep carefully speaking to each other's points, not past them. The result is a marvelously engaging and valuable volume. Stephen K. White, James Hart Professor of Politics, University of Virginia

As a practice and a concept, tolerance counts as a major historical discovery in struggles against domination. Yet by casting the tolerant as the figure of virtue, and the tolerated or intolerant as its other, political discourses of toleration often mask and sustain relations of domination. In this brilliant exchange between the two leading theorists of toleration in contemporary political theory, Wendy Brown and Rainer Forst trace the tangled embrace of power and toleration in all its intricacy. The clarity, grace and humor of the dialogue make for highly enjoyable reading, as accessible to students as it is illuminating for experts. With an insightful context-setting epilogue by Christoph Holzey and Luca Di Blaso, the book is a must-read for anyone interested in the paradoxes and moral importance of toleration. Melissa Williams, University of Toronto

Brown and Forst are outstanding scholars as well as authors of important books on this ambiguous term... Notre Dame Philosophical Reviews

We can gain much from reading and discussing this slim, insightful book. Marx & Philosophy Review of Books

Editorial Note
The Power of Tolerance: A Debate Between Wendy Brown and Rainer Forst
Epilogue: Tensions in Tolerance, by Luca Di Blasi and Christoph F. E. Holzhey
Notes on the Contributors

Read an excerpt from The Power of Tolerance:

Rainer Forst is Professor of Political Theory and Philosophy and Co-Director of the "Normative Orders" Research Cluster at Goethe University, Frankfurt am Main. His recent books include The Right to Justification, Toleration in Conflict and Justification and Critique.

Wendy Brown is Class of 1936 First Professor of Political Science at the University of California, Berkeley, where she is also affiliated with the graduate program in Critical Theory. Her recent books include Regulating Aversion: Tolerance in the Age of Empire and Identity, Walled States, Waning Sovereignty and Is Critique Secular? co-authored with T. Asad, J. Butler and S. Mahmood.

Christoph F. E. Holzhey is the founding director of the ICI Berlin Institute for Cultural Inquiry and led the core project Tension/Spannung with its recent foci on Multistable Figures and Complementarity. He has edited several volumes in the series Cultural Inquiry with Turia + Kant in Vienna: Tension/Spannung, The Scandal of Self-Contradiction: Pasolini's Multistable Subjectivities, Traditions, Geographies (with L. Di Blasi and M. Gragnolati), Situiertes Wissen und regionale Epistemologie: Zur Aktualität Georges Canguilhems und Donna J. Haraways (with A. Deuber-Mankowsky), and Multistable Figures: On the Critical Potentials of Ir/Reversible Aspect-seeing.

Luca Di Blasi is University Lecturer in Philosophy at the Universität Bern. Until the end of 2013, he was Academic Assistant to the Director at the ICI Berlin Institute for Cultural Inquiry. He has published widely on the topic of philosophy of religion, including Der Geist in der Revolte: Der Gnostizismus und seine Wiederkehr in der Postmoderne.