The Practices of the Enlightenment

Aesthetics, Authorship, and the Public 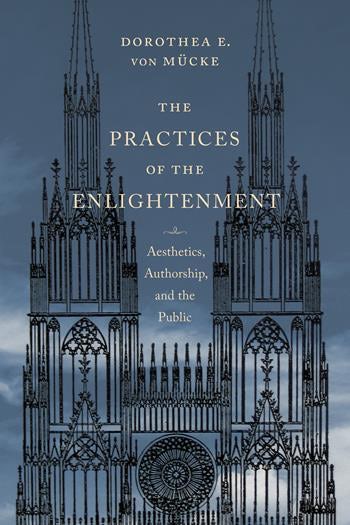 The Practices of the Enlightenment

Aesthetics, Authorship, and the Public

Rethinking the relationship between eighteenth-century Pietist traditions and Enlightenment thought and practice, The Practices of Enlightenment unravels the complex and often neglected religious origins of modern secular discourse. Mapping surprising routes of exchange between the religious and aesthetic writings of the period and recentering concerns of authorship and audience, this book revitalizes scholarship on the Enlightenment.

By engaging with three critical categories—aesthetics, authorship, and the public sphere—The Practices of Enlightenment illuminates the relationship between religious and aesthetic modes of reflective contemplation, autobiography and the hermeneutics of the self, and the discursive creation of the public sphere. Focusing largely on German intellectual life, this critical engagement also extends to France through Rousseau and to England through Shaftesbury. Rereading canonical works and lesser-known texts by Goethe, Lessing, and Herder, the book challenges common narratives recounting the rise of empiricist philosophy, the idea of the "sensible" individual, and the notion of the modern author as celebrity, bringing new perspective to the Enlightenment concepts of instinct, drive, genius, and the public sphere.

A remarkable and innovative investigation of the confluence of religious (especially pietistic) and aesthetic writings in shaping Enlightenment thought, offering a decisive intervention into intellectual history and the emergence of the aesthetic lexicon that still accompanies us today. Paul Fleming, Cornell University

This risk-taking, cliché-breaking book embodies the virtues of the writers it studies. Lessing, Rousseau, Kant, Herder, and Goethe come alive in its pages as the inventors of a new apprehension of art, as explorers of interiority, as creators of a critical public. Synthetic vision, astonishing breadth of learning, and richly textured analysis combine to produce a study of remarkable power and subtlety. Every chapter inspired me. The Practices of Enlightenment is a worthy successor to Habermas's great book on the emergence of the public sphere. David E. Wellbery, University of Chicago

If the legacy of the Enlightenment has been endlessly debated, its origins are hardly well understood. Here, with great precision and elegance, Dorothea von Mucke traces the fundamental religious underpinnings of some key secular achievements of eighteenth-century culture, namely aesthetics, the individual, and the public sphere. This prepares the way for some rather unexpected—and convincing—readings of key Enlightenment texts. The reader emerges with a profound sense of how our secularism has been shaped from its inception by theological forms of thought, a timely consideration. David Bates, University of California, Berkeley

Why are the arts and literature such crucial spaces for the modern cultivation of human freedom? Dorothea von Mücke gives this question a remarkable history, revealing how and why aesthetics became so fundamental to Western ideals of creativity, responsibility, and autonomy. Moving nimbly across theology, moral philosophy, natural philosophy, and print culture—and engaging a host of eighteenth-century literary figures from the familiar to the unknown—von Mücke's book charts how the Enlightenment made artistic creativity the very marker of humanity itself. Jonathan Sheehan, University of California, Berkeley

Acknowledgments
Introduction
Part One. The Birth of Aesthetics, the Ends of Teleology, and the Rise of Genius
1. The Surprising Origins of Enlightenment Aesthetics
2. Disinterested Interest: The Human Animal's Lack of Instinct
3. Beautiful, not Intelligent Design
4. Enlightenment Discourses on Original Genius
5. "Where Nature Gives the Rule to Art"
6. The Strasbourg Cathedral: Edification and Theophany
Conclusion
Part Two. Confessional Discourse, Autobiography, and Authorship
7. Pietism
8. Rousseau
9. Goethe: From the "Confessions of a Beautiful Soul" to Poetry and Truth
Part Three. Imagined Communities and the Mobilization of a Critical Public
10. Patriotic Invocations of the Public
11. Real and Virtual Audiences in Herder's Concept of the Modern Public
12. Mobilizing a Critical Public
Notes
Index

Dorothea E. von Mücke is professor of German and Comparative Literature at Columbia University. She is the author of Virtue and the Veil of Illusion: Generic Innovation and the Pedagogical Project and The Seduction of the Occult and the Rise of the Fantastic Tale. Her coedited books include Body and Text in the Eighteenth Century and A New History of German Literature.