The Protestant Ethnic and the Spirit of Capitalism 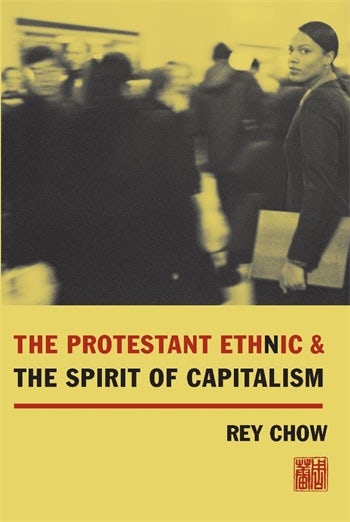 The Protestant Ethnic and the Spirit of Capitalism

In late-capitalist Western society, cross-ethnic cultural transactions are an inevitable daily routine. Yet, according to acclaimed cultural critic Rey Chow, the notion of ethnicity as it is currently used is theoretically ambivalent, confusing, indeed self-contradictory, straddling as it does an uneasy boundary between a universalist rhetoric of inclusion on the one hand, and actual, lived experiences of violence and intolerance on the other. To drastically reconceptualize ethnicity in the contemporary world, Chow proposes that it be examined in conjunction with Max Weber's famous theory about the Protestant work ethic and capitalism, which holds that secular belief in salvation often collaborates effectively with the interpellation, disciplining, and rewarding of subjects constituted by specific forms of labor. The charged figure that results from such a collaboration, resonant with the economic, psychological, and spiritual implications of the word "protest, " is what she refers to as the protestant ethnic.

Chow's discussion of the concept of 'ethnicity' in a late-capitalist Western society presents a creatively refreshing perspective on the contradictions and conflicts of this taken-for-granted concept. The Protestant Ethic and the Spirit of Capitalism... should challenge others who have long studied race and ethnic relations. Susan R. Takata, International Migration Review

Chow's critical vigilance results in a welcome and acute exposure of the invidious endorsements of racism that can characterize contemporary multiculturalism: tolerance, demeaning inclusion and tokenistic recognition... the book... illuminate[s] and enliven[s] ongoing debates. David Parker, Ethnic and Racial Studies

There is nothing consolatory...one is faced simply with the imperative to think harder and better about the problems that face back from the surface of the world. Eric Hayot, Chinese Literature: Essays, Articles, Reviews

Introduction: From Biopower to Ethnic Difference
Chapter 1. The Protestant Ethnic and the Spirit of Capitalism
Chapter 2. Brushes with the-Other-as-Face: Stereotyping and Cross-Ethnic Representation
Chapter 3. Keeping Them in Their Place: Coercive Mimeticism and Cross-Ethnic Representation
Chapter 4. The Secrets of Ethnic Abjection
Chapter 5. When Whiteness Feminizes... : Some Consequences of a Supplementary Logic
Postscript: Beyond Ethnic "Ressentiment"?

Rey Chow is Andrew W. Mellon Professor of the Humanities at Brown University. She is the author of many books, including Primitive Passions, which dealt with contemporary Chinese cinema and won the James Russell Lowell Prize, the most prestigious book award given by the Modern Language Association. She lives in Providence, RI.