Vernacularization, Religion, and the Premodern Public Sphere in India 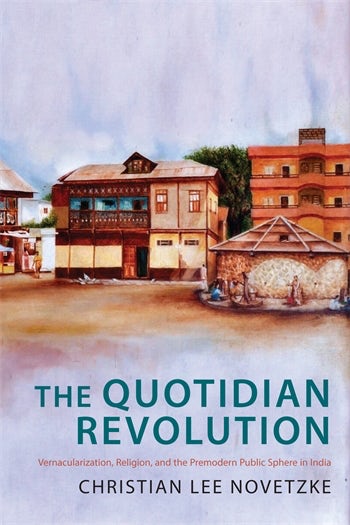 Vernacularization, Religion, and the Premodern Public Sphere in India

In thirteenth-century Maharashtra, a new vernacular literature emerged to challenge the hegemony of Sanskrit, a language largely restricted to men of high caste. In a vivid and accessible idiom, this new Marathi literature inaugurated a public debate over the ethics of social difference grounded in the idiom of everyday life. The arguments of vernacular intellectuals pushed the question of social inclusion into ever-wider social realms, spearheading the development of a nascent premodern public sphere that valorized the quotidian world in sociopolitical terms.

The Quotidian Revolution examines this pivotal moment of vernacularization in Indian literature, religion, and public life by investigating courtly donative Marathi inscriptions alongside the first extant texts of Marathi literature: the Lilacaritra (1278) and the Jñanesvari (1290). Novetzke revisits the influence of Chakradhar (c. 1194), the founder of the Mahanubhav religion, and Jnandev (c. 1271), who became a major figure of the Varkari religion, to observe how these avant-garde and worldly elites pursued a radical intervention into the social questions and ethics of the age. Drawing on political anthropology and contemporary theories of social justice, religion, and the public sphere, The Quotidian Revolution explores the specific circumstances of this new discourse oriented around everyday life and its lasting legacy: widening the space of public debate in a way that presages key aspects of Indian modernity and democracy.

Christian LeeNovetzke's important contribution to the problem of vernacularization is to carefully track a given instance—early modern Western India and the Marathi language—by bringing to bear close reading of major texts, historical sensitivity, sophisticated social and cultural theory, and expository vivacity. Instead of emphasizing vernacularization's relationship to political change, he compellingly highlights the creation of a new public culture in which problems of inequality could be addressed, however much that culture was shaped, not by subaltern intellectuals, but by elites. Sheldon Pollock, author of A Rasa Reader: Classical Indian Aesthetics

The Quotidian Revolution is an erudite and thoughtful work, not only about Chakradhar and Jñandev, two powerful figures in the creation of Marathi culture, but also about how public spheres are created and maintained through literary and historical accounts. Novetzke surprises and delights in his unorthodox accounts of how canonical texts such as Lilacaritra and Jñanesvari came to be the standard bearers for accessible literary culture, and how Marathi came to be Marathi. We are indebted yet again to Novetzke for another lively, humane, and insightful account of the collective work of the Marathi thinkers gone before us. Laurie Patton, Professor of Indian Religions and President, Middlebury College

The Quotidian Revolution is by far one of the most sustained and profoundly suggestive works on religion, language, and social history in medieval India. This book is theoretically and methodologically rich and complex and draws on understudied primary materials that Novetzke has deftly translated and interpreted for his readers. Davesh Soneji, author of Unfinished Gestures: Devadasis, Memory, and Modernity in South India

The Quotidian Revolution is required reading for anyone with a serious interest in Maharashtra, medieval bhakti, and vernacularization. James W. Laine, author of Meta-Religion: Religion and Power in World History

Novetzke offers scholars a new and exciting way of comprehending the relation of common or vernacular language and social power in everyday life in South Asia and elsewhere. This book enriches many fields, including the study of the history, of religion and of literature. Sumit Guha, author of Beyond Caste: Identity and Power in South Asia, Past and Present

Novetzke demonstrates the circumstances that enabled a vigorous, innovative, often irreverent set of Marathi texts describing and discussing the lives and experiences of ordinary men and women to burst forth in the second half of the thirteenth century. In his expert hands, this quotidian revolution of the literary imagination comes to life in an account that is deeply embedded in original textual and historical scholarship but also enlivened and illuminated by an impressive range of contemporary social theory. Thomas Blom Hansen, Reliance-Dhirubhai Ambani Professor of Anthropology, author of Melancholia of Freedom: Social Life in an Indian Township in South Africa

The Quotidian Revolution is an impressive account of the remarkable potential of vernacular literature to levy social critiques, open ethical possibilities, and create a space for new types of public belonging. William E. B. Sherman, Marginalia Los Angeles Review of Books

An admirably bold attempt to connect dots that are few and far between to create a picture of 13th-century western India. In doing so, Novetzke has made another significant contribution to scholarship. Reading Religion

Preface: The Shape of the Book
Acknowledgments
Note on Translation, Transliteration, and Abbreviations
Introduction: The Argument of the Book
Part One
1. The Yadava Century
2. Traces of a Medieval Public
3. Two Biographies of Literary Vernacularization
Part Two
4. The Vernacular Moment
5. The Mahanubhav Ethic
Part Three
6. A Vernacular Manifesto
7. Sonic Equality
Conclusion: The Vernacular Millennium and the Quotidian Revolution
Notes
Glossary
Bibliography
Index

Read a selection of excerpts:

Christian Lee Novetzke is professor of religious studies, South Asia studies, and global studies at the Jackson School of International Studies at the University of Washington. He is the author of Religion and Public Memory: A Cultural History of Saint Namdev in India (Columbia, 2008) and coauthor, with William Elison and Andy Rotman, of Amar Akbar Anthony: Bollywood, Brotherhood, and the Nation (2016).