The Racial Discourses of Life Philosophy 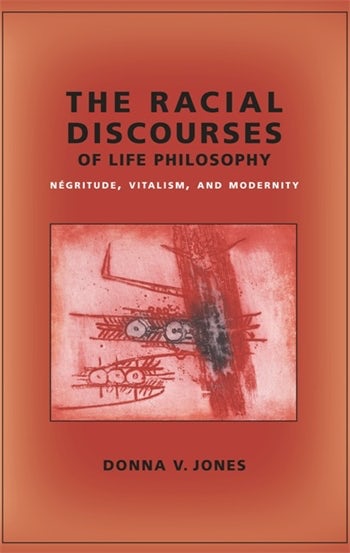 The Racial Discourses of Life Philosophy

In the early twentieth century, the life philosophy of Henri Bergson summoned the élan vital, or vital force, as the source of creative evolution. Bergson also appealed to intuition, which focused on experience rather than discursive thought and scientific cognition. Particularly influential for the literary and political Négritude movement of the 1930s, which opposed French colonialism, Bergson's life philosophy formed an appealing alternative to Western modernity, decried as "mechanical," and set the stage for later developments in postcolonial theory and vitalist discourse.

Revisiting narratives on life that were produced in this age of machinery and war, Donna V. Jones shows how Bergson, Nietzsche, and the poets Leopold Senghor and Aimé Césaire fashioned the concept of life into a central aesthetic and metaphysical category while also implicating it in discourses on race and nation. Jones argues that twentieth-century vitalism cannot be understood separately from these racial and anti-Semitic discussions. She also shows that some dominant models of emancipation within black thought become intelligible only when in dialogue with the vitalist tradition. Jones's study strikes at the core of contemporary critical theory, which integrates these older discourses into larger critical frameworks, and she traces the ways in which vitalism continues to draw from and contribute to its making.

This book brings together Donna V. Jones's impressive knowledge of nineteenth-century German hermeneutic and philosophical traditions with her critique of colonialism. It shows, in particular, the ways in which the rise of racial discourse drew upon vitalist traditions. Through an erudite and striking comparative reading of Aimé Cesaire and Léopold Senghor, Jones delineates two very different trajectories for the vitalist tradition within twentieth-century black thought. Judith Butler, University of California, Berkeley

Donna V. Jones's magisterial book reveals how race discourse in interwar Europe was appropriated by anticolonialists in order to position Négritude as the regenerative counterpart to a moribund Europe. Jones also draws on her historical findings to throw critical light on the afterlife of vitalism in the thought of such contemporary theorists as Gilles Deleuze, Antonio Negri, Giorgio Agamben, and Elizabeth Grosz. Jones enriches our understanding of what she perceptively terms 'postmodern vitalism.' This is a remarkable achievement, and Racial Discourses of Life Philosophy will have a significant impact on many disciplines, including African and Caribbean studies, art history, comparative literature, French studies, history, and philosophy. Mark Antliff, Duke University

In this remarkable study, Donna V. Jones not only examines the influence of Bergson on Senghor, Cesaire, and their disciples, but also the vital connections between life philosophies in the West and the structure of thought from which the expressive strategies of Negritude derive. F. Abiola Irele, Harvard University

This careful study outlines the problems of an uncritical return to Bergson that so many contemporary critics, especially those influenced by Gilles Deleuze, participate in. Jones's work shores up serious misgivings about the racial implication of e´lan vital in Bergson and contemporary practices of thought that she classifies as New Bergsonisms. José Esteban Muñoz, Women and Performance

Rigorous textual work and provocative intervention in the history of ideas, emerges as an absolutely crucial book...fundamentally changes our understanding of the Negritude movement. Journal of French and Francophone Philosophy

....detailed, incisive, and stimulating, representing an important and original intervention into debates around both the influence of vitalism on current critical theory and the legacies of negritude. Jeremy F. Lane, H-France

The importance of Donna V. Jones's intervention is not simply that it tries to take the measure of vitalism, but that it places the history of cultural vitalism in its fraught dialogue with questions of racial discourse. Benjamin Noys, Radical Philosophy

Introduction: The Resilience of Life
1. On the Mechanical, Machinic, and Mechanistic
2. Contesting Vitalism
3. Bergson and the Racial Élan Vital
4. Négritude and the Poetics of Life
Acknowledgments
Notes
Index

Donna V. Jones is an associate professor of English at the University of California, Berkeley, and has taught at Stanford University and Princeton University. Her next project is The Promise of European Decline: Race and Historical Pessimism in the Era of the Great War.