The Remains of Being 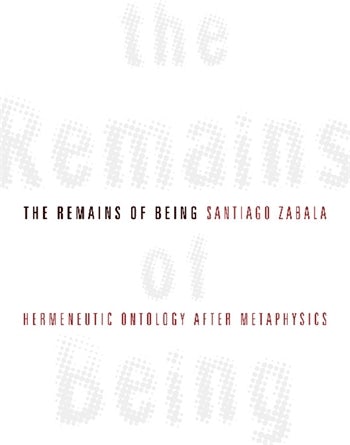 The Remains of Being

In Basic Concepts, Heidegger claims that "Being is the most worn-out" and yet also that Being "remains constantly available." Santiago Zabala radicalizes the consequences of these little known but significant affirmations. Revisiting the work of Jacques Derrida, Reiner Schürmann, Jean-Luc Nancy, Hans-Georg Gadamer, Ernst Tugendhat, and Gianni Vattimo, he finds these remains of Being within which ontological thought can still operate.

Being is an event, Zabala argues, a kind of generosity and gift that generates astonishment in those who experience it. This sense of wonder has fueled questions of meaning for centuries-from Plato to the present day. Postmetaphysical accounts of Being, as exemplified by the thinkers of Zabala's analysis, as well as by Nietzsche, Dewey, and others he encounters, don't abandon Being. Rather, they reject rigid, determined modes of essentialist thought in favor of more fluid, malleable, and adaptable conceptions, redefining the pursuit and meaning of philosophy itself.

Zabala has given us a book which deserves wide reading and debate. David Jasper, Literature & Theology

An effective reminder of some of the most important developments twentieth-century continental philosophy. Richard Polt, Parrhesia

Chapter 1: Being Destroyed: Heidegger's Destruction of Being as Presence
1. Retrieving the Meaning of Being
2. Questioning the "Worn-Out" Being
Chapter 2: After the Destruction: The Remains of Being
3. Schürmann's Traits of Economical Anarchies
4. Derrida's Treasures of Traces
5. Nancy's Copresences of Singular Plurals
6. Gadamer's Conversations of Language
7. Tugendhat's Meanings of Sentences
8. Vattimo's Events of Weakness
Chapter 3: Generating Being Through Interpretation: The Hermeneutic Ontology
of Remnants
9. Logics of Discursive Continuities
10.Generating Being "from Within"
Notes
Bibliography
Index

Santiago Zabala is ICREA Research Professor at the University of Barcelona. He is the author of The Hermeneutic Nature of Analytic Philosophy: A Study of Ernst Tugendhat; editor of Art's Claim to Truth, Weakening Philosophy, Nihilism and Emancipation, and The Future of Religion; and coeditor (with Jeff Malpas) of Consequences of Hermeneutics.