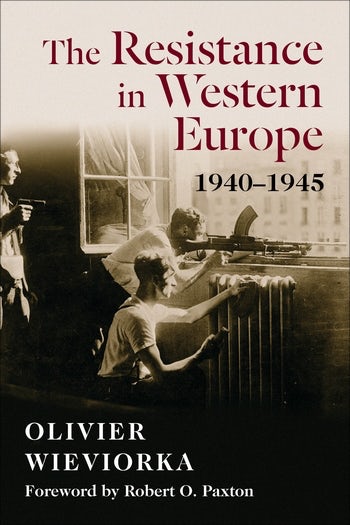 In just three months in 1940, Denmark, Norway, Belgium, the Netherlands, Luxembourg, and France fell to the Nazis. The German occupation of Western Europe had begun—but a brave few rose up in defiance. National resistance has long been celebrated in remembrances of World War II, depicted as making significant contributions to the defeat of Nazi Germany. However, the so-called army of shadows drew heavily on the support of London and Washington, a fact often forgotten in postwar Europe.

The Resistance in Western Europe, 1940–1945 is a sweeping analytical history of the underground anti-Nazi forces during World War II. Examining clandestine organizations in Norway, Denmark, the Netherlands, Belgium, France, and Italy, Olivier Wieviorka sheds new light on the factors that shaped the resistance and its place in the grand scheme of Anglo-American military strategy. While national actors played a leading role in fomenting resistance, British and American intelligence services and propaganda as well as financial, material, and logistical support were crucial to its activities and growth. Wieviorka illuminates the policies of governments in exile and resistance actors regarding cooperation with the British and Americans, pointing to the persistence of national self-interest and long-standing historical tensions. Drawing on a wide range of archival sources and bringing together the political, diplomatic, and military dimensions of the conflict, this book is the first account of the resistance on a continental scale and from a trans-European perspective.

With a subject like this, where the stories are almost always saturated with romanticism, and tend to look at events in just one country, Wieviorka's transnational accounting provides a useful antidote. Thomas E. Ricks, New York Times Book Review

Olivier Wieviorka treats the resistance in Western Europe as a multinational coalition. Anglo-Americans supplied arms and funding to resistance groups on the continent, and Resistance movements in turn aided in the Allied war effort. It was part tug-of-war, résistants striving to maintain autonomy, and part pas de deux, the two sides working together in a common effort that helped shape what Wieviorka calls an incipient “European consciousness.” This is a history on a grand scale commensurate with the epic character of the complex struggle it recounts. Philip Nord, Princeton University

Wieviorka presents a clear-eyed view of the achievements and limitations of resistance efforts, moving beyond romanticized tales of valor and dismissive tales of military ineffectiveness. Above all, the book shows the vital role played first by the British and, later, American secret services—all too often forgotten in Europe since the war—in coordinating and directing the efforts of disparate movements across Western Europe. Clifford Rosenberg, City College of New York

This book is as richly informative about the Allies as about the resistance. Wieviorka examines more fully than any previous work the complicated three-way negotiations among the Anglo-American authorities, the exiled governments of France, Holland, Belgium, and Norway in London, and the underground movements that together made it possible to plan and execute clandestine operations. From the foreword by Robert O. Paxton

Masterfully analyzes the resistance to the German occupations of Belgium, Denmark, France, Italy, the Netherlands, and Norway during World War II. Foreign Affairs

Olivier Wieviorka is professor of history at the École normale supérieure de Paris-Saclay. His books in English include The French Resistance (2016), also translated by Jane Marie Todd.

Jane Marie Todd has translated more than eighty-five books for university presses and art museums, including Claude Lévi-Strauss’s We Are All Cannibals (Columbia, 2016).