The Return of Bipolarity in World Politics 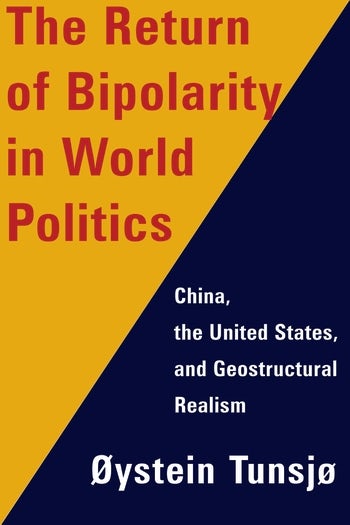 The Return of Bipolarity in World Politics

Since the collapse of the Soviet Union, the international system has been unipolar, centered on the United States. But the rise of China foreshadows a change in the distribution of power. Øystein Tunsjø shows that the international system is moving toward a U.S.-China standoff, bringing us back to bipolarity—a system in which no third power can challenge the top two.

The Return of Bipolarity in World Politics surveys the new era of superpowers to argue that the combined effects of the narrowing power gap between China and the United States and the widening power gap between China and any third-ranking power portend a new bipolar system that will differ in crucial ways from that of the last century. Tunsjø expands Kenneth N. Waltz’s structural-realist theory to examine the new bipolarity within the context of geopolitics, which he calls “geostructural realism.” He considers how a new bipolar system will affect balancing and stability in U.S.-China relations, predicting that the new bipolarity will not be as prone to arms races as the previous era’s; that the risk of limited war between the two superpowers is likely to be higher in the coming bipolarity, especially since the two powers are primarily rivals at sea rather than on land; and that the superpowers are likely to be preoccupied with rivalry and conflict in East Asia instead of globally. Tunsjø presents a major challenge to how international relations understands superpowers in the twenty-first century.

This fascinating book expands our understanding of the functions of polarity in international politics and tells us a lot about the coming bipolar world. It is a pioneering work and a comprehensive study of contemporary China-U.S relations from a bipolar perspective. Yan Xuetong, Tsinghua University

Øystein Tunsjø has written a timely and important book. He argues that China’s rise heralds a return to bipolarity in international politics but that geography will prevent competition with the United States from reaching the intensity of the Cold War. This book should be read widely by scholars and policy makers alike. Taylor Fravel, Massachusetts Institute of Technology

Challenging the conventional wisdom of emerging multipolarity, Tunsjø convincingly shows that China’s rise has already ushered in a new era of bipolarity—one with a high likelihood of limited war between the superpowers. A major contribution to IR grand theory and to thinking about international order. Randall L. Schweller, Ohio State University, editor in chief, Security Studies

[The Return of Bipolarity in World Politics] provide[s] valuable nuance for the growing number of analysts who are worried about the strategic implications of China’s rise. Foreign Affairs

Whether one agrees with Tunsjø’s thesis on the return of bipolarity in world politics or not, both political scientists and policymakers should take the book seriously. Based on impressive comparative studies of the Cold War in European history and the emerging US-China rivalry in East Asia, the geostructural realist theory presented here forces us to rethink the relevance of bipolarity in the twenty-first century. The book’s many arguments have already proven prescient. The Trump administration’s national security and defense strategies have labeled China a long-term strategic competitor while declaring the return of traditional great power politics. As the US-China balancing and competition heat up, all of us can benefit from the book’s insights and warnings. Yong Deng, Pacific Affairs

Tunsjø's effort is an essential contribution to international relations theory and a basic introduction to an understanding of the concept of power. Choice

Øystein Tunsjø is professor at the Norwegian Institute for Defence Studies at the Norwegian Defence University College. He is the author of U.S. Taiwan Policy: Constructing the Triangle (2008) and Security and Profit in China’s Energy Policy: Hedging Against Risk (Columbia, 2013). Tunsjø is coeditor of several books, including Strategic Adjustment and the Rise of China: Power and Politics in East Asia (2017, with Robert S. Ross).