The Risks of Prescription Drugs 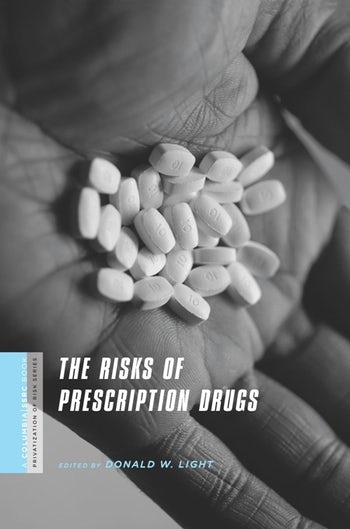 The Risks of Prescription Drugs

Few people realize that prescription drugs have become a leading cause of death, disease, and disability. Adverse reactions to widely used drugs, such as psychotropics and birth control pills, as well as biologicals, result in FDA warnings against adverse reactions.

The Risks of Prescription Drugs describes how most drugs approved by the FDA are under-tested for adverse drug reactions, yet offer few new benefits. Drugs cause more than 2.2 million hospitalizations and 110,000 hospital-based deaths a year. Serious drug reactions at home or in nursing homes would significantly raise the total. Women, older people, and people with disabilities are least used in clinical trials and most affected.

The Risks of Prescription Drugs tackles critical questions about the pharmaceutical industry and the privatization of risk. To what extent does the FDA protect the public from serious side effects and disasters? What is the effect of giving the private sector and markets a greater role and reducing public oversight? This volume considers whether current rules and incentives put patients' health at greater risk, the effect of the expansion of disease categories, the industry's justification of high U.S. prices, and the underlying shifts in the burden of risk borne by individuals in the world of pharmaceuticals. Chapters cover risks of statins for high cholesterol, SSRI drugs for depression and anxiety, and hormone replacement therapy for menopause. A final chapter outlines six changes to make drugs safer and more effective.

Suitable for courses on health and aging, gender, disability, and minority studies, this book identifies the Risk Proliferation Syndrome that maximizes the number of people exposed to these risks.

Additional Columbia / SSRC books on the privatization of risk and its implications for Americans:

Disaster and the Politics of InterventionEdited by Andrew Lakoff

Pensions, Social Security, and the Privatization of RiskEdited by Mitchell A. Orenstein

The Risks of Prescription Drugs explains in clear, concise, and unflinching language the consequences of ignoring the discrepancy between the drug industry's private interests and the public service we hope and naïvely expect from them. This book provides consumers with tools for self-defense and concerned citizens with a road map for rebalancing American medicine. John Abramson, Harvard Medical School, author of Overdosed America: The Broken Promise of American Medicine

This volume introduces important debates on pharmaceutical promotion and marketing, needed drug evaluation and regulation, professional conflicts of interest, and increased medicalization of behavior. It explores important trends and policy questions that all engaged citizens should consider. David Mechanic, Rutgers Institute for Health, Health Care Policy, and Aging Research, and author of The Truth About Health Care: Why Reform Is Not Working in America

This is a sensible, readable and constructive book that could in various respects open the reader's eyes, and then lead him, with his eyes wide open, along the road to a healthier world. M.N.G. Dukes, International Journal of Risk and Safety in Medicine

This well-referenced title will be of particular interest to prescribers, but I recommend it to all healthcare professionals. Roger Evans, Nursing Standard

Donald W. Light is professor of social medicine and comparative health care at the University of Medicine and Dentistry of New Jersey and a senior visiting researcher at Princeton.