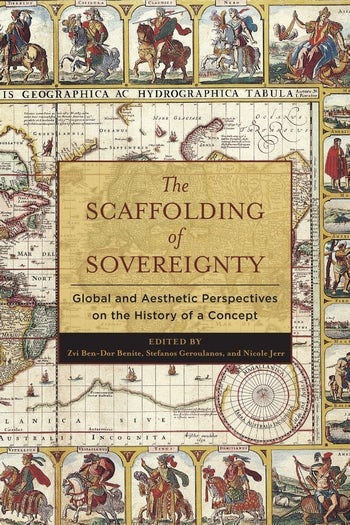 What is sovereignty? Often taken for granted or seen as the ideology of European states vying for supremacy and conquest, the concept of sovereignty remains underexamined both in the history of its practices and in its aesthetic and intellectual underpinnings. Using global intellectual history as a bridge between approaches, periods, and areas, The Scaffolding of Sovereignty deploys a comparative and theoretically rich conception of sovereignty to reconsider the different schemes on which it has been based or renewed, the public stages on which it is erected or destroyed, and the images and ideas on which it rests.

The essays in The Scaffolding of Sovereignty reveal that sovereignty has always been supported, complemented, and enforced by a complex aesthetic and intellectual scaffolding. This collection takes a multidisciplinary approach to investigating the concept on a global scale, ranging from an account of a Manchu emperor building a mosque to a discussion of the continuing power of Lenin’s corpse, from an analysis of the death of kings in classical Greek tragedy to an exploration of the imagery of “the people” in the Age of Revolutions. Across seventeen chapters that closely study specific historical regimes and conflicts, the book’s contributors examine intersections of authority, power, theatricality, science and medicine, jurisdiction, rulership, human rights, scholarship, religious and popular ideas, and international legal thought that support or undermine different instances of sovereign power and its representations.

That sovereign power is often fragile and never established once and for all is the startling proposition that organizes this spectacularly interesting sequence of investigations. Sovereignty is impossible to study, the essays propose, without attention to its ‘scaffolding,’ defined as all the symbolic management that power continually requires. Leaping across time and spanning the world, The Scaffolding of Sovereignty showcases scholarly gems that together reflect how the crown of sovereignty is kept in place—and sometimes slips. Samuel Moyn, author of Not Enough: Human Rights in an Unequal World

This volume showcases the best of global intellectual history. Sovereignty emerges as a complex force: aesthetically layered, politically mutable, historically contingent, and consistently elusive. At the same time, despite the apparent Eurocentrism of the concept's recent lineage, readers will come away convinced of the importance of sovereignty as an analytical category, key to making sense of political culture in world history and political thought in global context. Lauren Benton, author of A Search for Sovereignty: Law and Geography in European Empires, 1400–1900

Joining performance studies with philosophy, theology, and ethnography, the figure of the scaffold aptly evokes the symbolic supports and global visibility of sovereignty today. The contributors to this ambitious collection of essays fearlessly disclose recurrent features of sovereignty across time and space, often beginning immanently with the cosmic cartographies generated by particular regimes and projected in aesthetic displays, liturgical exercises, and citational enterprises that reveal common themes in the global drama of majesty. Julia Reinhard Lupton, University of California, Irvine

Foreword, by Dick Howard
Editors' Introduction, by Zvi Ben-Dor Benite, Stefanos Geroulanos, and Nicole Jerr
Part I. Stages
Preface
1. Sad Stories of the Death of Kings: Sovereignty and Its Constraints in Greek Tragedy and Elsewhere, by Glenn W. Most
2. Contested Sovereignty: Heaven, the Monarch, the People, and the Intellectuals in Traditional China, by Yuri Pines
3. Nurhaci's Gambit: Sovereignty as Concept and Praxis in the Rise of the Manchus, by Nicola Di Cosmo
4. The Living Image of the People, by Jason Frank
Part II. Courts
Preface
5. Public Health, the State, and Religious Scholarship: Sovereignty in Idrīs al-Bidlīsī's Arguments for Fleeing the Plague, by Justin Stearns
6. The Dancing Despot: Toyotomi Hideyoshi and the Performative Symbolism of Power, by Stanca Scholz-Cionca
7. Liberal Constitutionalism and the Sovereign Pardon, by Bernadette Meyler
8. The Vanishing Slaves of Paris: The Lettre de Cachet and the Emergence of an Imperial Legal Order in Eighteenth-Century France, by Miranda Spieler
9. Re-touching the Sovereign: Biochemistry of Perpetual Leninism, by Alexei Yurchak
Part III. Acts
Preface
10. Hijra and Exile: Islam and Dual Sovereignty in Qing China, by Zvi Ben-Dor Benite
11. The Neurology of Regicide: Decapitation Experiments and the Science of Sovereignty, by Cathy Gere
12. The "Millennium" of 1857: The Last Performance of the Great Mughal, by A. Azfar Moin
13. Exit the King? Modern Theater and the Revolution, by Nicole Jerr
Part IV. Shifts
Preface
14. Revolution in Permanence and the Fall of Popular Sovereignty, by Dan Edelstein
15. Exile Within Sovereignty: Critique of "The Negation of Exile" in Israeli Culture, by Amnon Raz-Krakotzkin
16. Affective Sovereignty, International Law, and China's Legal Status in the Nineteenth Century, by Li Chen
17. The Sovereignty of the New Man After Wagner: Artist and Hero, Symbolic History, and the Staging of Origins, by Stefanos Geroulanos
List of Contributors
Index

Zvi Ben-Dor Benite is professor of history at New York University and the author of The Dao of Muhammad: A Cultural History of Muslims in Late Imperial China (2005) and The Ten Lost Tribes: A World History (2009).

Stefanos Geroulanos is professor of history at New York University. He is the author of Transparency in Postwar France: A Critical History of the Present (2017) and coauthor of The Human Body in the Age of Catastrophe: Brittleness, Integration, Science, and the Great War (2018).