The Scandal of Reason

A Critical Theory of Political Judgment 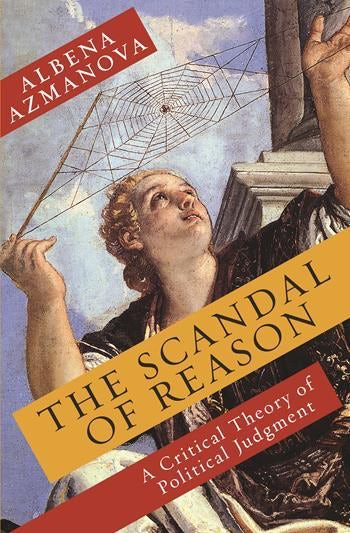 The Scandal of Reason

A Critical Theory of Political Judgment

Theories of justice are haunted by a paradox: the more ambitious the theory of justice, the less applicable and useful the model is to political practice; yet the more politically realistic the theory, the weaker its moral ambition, rendering it unsound and equally useless. Brokering a resolution to this "judgment paradox," Albena Azmanova advances a "critical consensus model" of judgment that serves the normative ideals of a just society without the help of ideal theory.

Tracing the evolution of two major traditions in political philosophy—critical theory and philosophical liberalism—and the way they confront the judgment paradox, Azmanova critiques prevailing models of deliberative democracy and their preference for ideal theory over political applicability. Instead, she replaces the reliance on normative models of democracy with an account of the dynamics of reasoned judgment produced in democratic practices of open dialogues. Combining Hannah Arendt's study of judgment with Pierre Bourdieu's social critique of power relations, and incorporating elements of political epistemology from Kant, Wittgenstein, H. L. A. Hart, Max Weber, and American philosophical pragmatism, Azmanova centers her inquiry on the way participants in moral conflicts attribute meaning to their grievances of injustice. She then demonstrates the emancipatory potential of the model of critical deliberative judgment she forges and its capacity to guide policy making.

This model's critical force yields from its capacity to disclose the common structural sources of injustice behind conflicting claims to justice. Moving beyond the conflict between universalist and pluralist positions, Azmanova grounds the question of "what is justice?" in the empirical reality of "who suffers?" in order to discern attainable possibilities for a less unjust world.

Concerned with the links connecting ethical positions and political reality, this ambitious and appealing contribution to critical theory guides our understanding of power and judgment, democracy and justice. Ranging wisely across multiple literatures and considerations, The Scandal of Reason offers compelling arguments about the level, type, and validity of ordered reflection most likely to advance good judgment and decent values under vexing conditions. Ira Katznelson, Ruggles Professor of Political Science and History, Columbia University

With this original and incisive book, Albena Azmanova develops a new hermeneutic for reconciling two models of reasoning that have long been opposed to one another: contextually sensitive political judgments on the one hand versus procedurally-oriented models of discursive validity on the other. She argues that the more ideal a model of judgment, the less applicable in practice, and the more applicable in practice, the less morally rigorous—this has been the dilemma. She tries to resolve this by developing a model of critical political judgment, sensitive to shared matrices of meaning as well as hierarchies of reference. This is a major contribution to theories of judgment and is also written with flair and humor. Seyla Benhabib, Eugene Meyer Professor of Political Science and Philosophy, Yale University

Can deliberation avoid reproducing structural injustice? Dissatisfied with standard procedural models of public reason, Albena Azmanova proposes a new approach that foregrounds the ways in which power asymmetries prestructure deliberators' judgments. Combining philosophical rigor with sociological sensitivity, she extends the reach of critique to crucial regions that liberals ignore: namely, the sociocultural frames that simultaneously enable and constrain our capacity to perceive injustices. The result is a fascinating and convincing book that clarifies reason's 'scandalous' ability to serve both domination and emancipation. Nancy Fraser, Henry A. and Louise Loeb Professor of Political and Social Science, the New School for Social Research

Albena Azmanova navigates between abstract, universalist conceptions of justice and legitimacy and situated, particularistic claims that disguise their implicit norms. Her work on judgment solves many of the problems of existing theories of deliberative democracy without surrendering normative justification. What is especially valuable in her work is that she transforms deliberative theory in a way that will be more usable for both empirical analysis and political orientation. Andrew Arato, Dorothy Hirshon Professor in Political and Social Theory, The New School for Social Research

Albena Azmanova identifies what seems to have been a paradox in deliberative theory--that it be either relevant or normative but not both. She resolves this paradox with here own 'critical consensus model,' which shows that we need not give up on social criticism and political relevance in order to develop a theory with normative force. Noëlle McAfee, Emory University

Moving well beyond the earlier generation of discursive theories, [Azmanova] open[s] up new modalities of politics and provide[s] us with new ways of thinking about them. Kevin Olson, Constellations

Albena Azmanova teaches political theory at the University of Kent in Brussels and is senior associate researcher at the Institute for European Studies of the Vrije Universiteit Brussel. Born in Bulgaria and educated in France and the United States, she lives in Belgium. Her writing focuses on political judgment and social justice; the transformation of capitalism and the emergence of new political ideologies; and Eastern Europe's postcommunist metamorphosis.