The Scandal of Susan Sontag

Edited by Barbara Ching and Jennifer A. Wagner-Lawlor 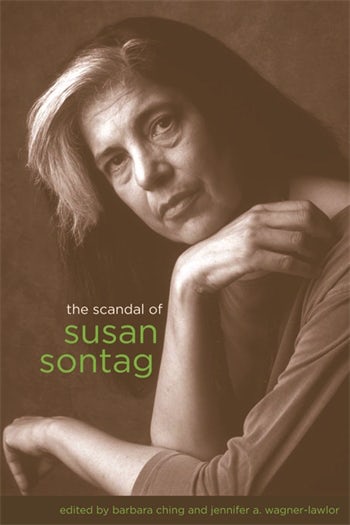 The Scandal of Susan Sontag

Edited by Barbara Ching and Jennifer A. Wagner-Lawlor

Susan Sontag (1933–2004) spoke of the promiscuity of art and literaturethe willingness of great artists and writers to scandalize their spectators through critical frankness, complexity, and beauty. Sontag's life and thought were no less promiscuous. She wrote deeply and engagingly about a range of subjectstheater, sex, politics, novels, torture, and illnessand courted celebrity and controversy both publicly and privately. Throughout her career, she not only earned adulation but also provoked scorn. Her living was the embodiment of scandal.

In this collection, Terry Castle, Nancy K. Miller, Wayne Koestenbaum, E. Ann Kaplan, and other leading scholars revisit Sontag's groundbreaking life and work. Against Interpretation, "Notes on Camp," Letter from Hanoi, On Photography, Illness as Metaphor, I, Etcetera, and The Volcano Loverthese works form the center of essays no less passionate and imaginative than Sontag herself. Debating questions raised by the thinker's own images and identities, including her sexuality, these works question Sontag's status as a female intellectual and her parallel interest in ambitious and prophetic fictional women; her ambivalence toward popular culture; and her personal and professional "scandals." Paired with rare photographs and illustrations, this timely anthology expands our understanding of Sontag's images and power.

[The Scandal of Susan Sontag] yields new insights on a most complex sensibility... with sophisticated admiration... [and] the requisite doses of wit. Publishers Weekly

The Scandal of Susan Sontag offers revealing insights into the work of one of America's most famous and provocative intellectuals Charles Green, The Harvard Gay and Lesbian Review

Barbara Ching is an associate professor of English at the University of Memphis. She is the author of Wrong's What I Do Best: Hard Country Music and Contemporary Culture and the coeditor of Knowing Your Place: Rural Identity and Cultural Hierarchy.

Jennifer A. Wagner-Lawlor is associate professor of women's studies and English at Penn State University. She is the author of A Moment's Monument: Revisionary Poetics and the Nineteenth-Century Sonnet.