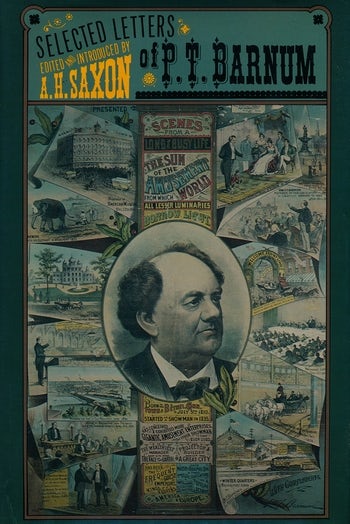 "I believe hugely in advertising and blowing my own trumpet, beating the gongs, drums, to attract attention to a show," Phineas Taylor Barnum wrote to a publisher in 1860. "I don't believe in 'duping the public,' but I believe in first attracting and then pleasing them."The name P.T. Barnum is virtually synonymous with the fine art of self-advertisement and the apocryphal statement, "There's a sucker born every minute." Nearly a century after his death, Barnum remains one of America's most celebrated figures.

In the Selected Letters of P.T. Barnum, A.H. Saxon brings together more than 300 letters written by the self-styled "Prince of Humbugs." Here we see him, opinionated and exuberant, with only the rarest flashes of introspection and self-doubt, haggling with business partners, blustering over politics, and attempting to get such friends as Mark Twain to endorse his latest schemes.

Always the king of showmen, Barnum considered himself a museum man first and was forever on the lookout for "curiosities," whether animate or inanimate. His early career included such outright frauds as Joice Heth, the "161-year-old nurse of George Washington," and the Fejee Mermaid-the desiccated head and torso of a monkey sewn to the body of a fish. Although in later years he projected a more solid, respectable image-managing the irreproachable "legitimate" attraction Jenny Lind, becoming a leading light in the temperance crusade, founding the Barnum & Bailey Circus-much of his daily existence continued to be unabashedly devoted to manipulating public opinion so as to acquire for himself and his enterprises what he delightedly termed "notoriety."

His famous autobiography, The Life of P.T. Barnum, which he regularly augmented during the last quarter century of his life, was itself a masterpiece of self-promotion. "Will you have the kindness to announce that I am writing my life & that fifty-seven different publishers have applied for the chance of publishing it," he wrote to a newspaper editor, adding, "Such is the fact-and if it wasn't, why still it ain't a bad announcement."