The Sing-song Girls of Shanghai 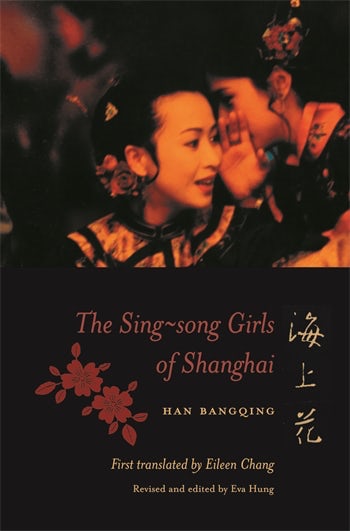 The Sing-song Girls of Shanghai

Desire, virtue, courtesans (also known as sing-song girls), and the denizens of Shanghai's pleasure quarters are just some of the elements that constitute Han Bangqing's extraordinary novel of late imperial China. Han's richly textured, panoramic view of late-nineteenth-century Shanghai follows a range of characters from beautiful sing-song girls to lower-class prostitutes and from men in positions of social authority to criminals and ambitious young men recently arrived from the country. Considered one of the greatest works of Chinese fiction, The Sing-song Girls of Shanghai is now available for the first time in English.

Neither sentimental nor sensationalistic in its portrayal of courtesans and their male patrons, Han's work inquires into the moral and psychological consequences of desire. Han, himself a frequent habitué of Shanghai brothels, reveals a world populated by lonely souls who seek consolation amid the pleasures and decadence of Shanghai's demimonde. He describes the romantic games played by sing-song girls to lure men, as well as the tragic consequences faced by those who unexpectedly fall in love with their customers. Han also tells the stories of male patrons who find themselves emotionally trapped between desire and their sense of propriety.

First published in 1892, and made into a film by Hou Hsiao-hsien in 1998, The Sing-song Girls of Shanghai is recognized as a pioneering work of Chinese fiction in its use of psychological realism and its infusion of modernist sensibilities into the traditional genre of courtesan fiction. The novel's stature has grown with the recent discovery of Eileen Chang's previously unknown translation, which was unearthed among her papers at the University of Southern California. Chang, who lived in Shanghai until 1956 when she moved to California and began to write in English, is one of the most acclaimed Chinese writers of the twentieth century.

Its literary and historical significance is indisputable. More important to the average reader, though, [is] its absorbing storytelling. Lesley Downer, New York Times Book Review

Accurate and readable. The novel provides a comprehensive and detailed description of a courtesan society... Recommended. Choice

This is a finely printed publication, and an important novel, but it also provides a provocative study in edition and translation theory. Chloe Starr, China Review International

The publication of this book is a significant event in the upper echelons of Chinese literary study... Finally a book that's been much talked about is now available to an international readership. Bradley Winterton, Taipei Times

Han Bangqing (1856-1894) founded China's first literary magazine and is considered one of the most important writers of modern China.

Eileen Chang (1920-1995) was a legendary figure in Chinese literature and the author of the essay collection Written on Water (Columbia, 2005) and the novels The Rogue of the North and The Rice-Sprout Song: A Novel of Modern China.

Eva Hung is the editor of the journal Renditions and the translator, editor, and author of more than two dozen books, including Contemporary Women Writers: Hong Kong and Taiwan.