The Song of Everlasting Sorrow

A Novel of Shanghai 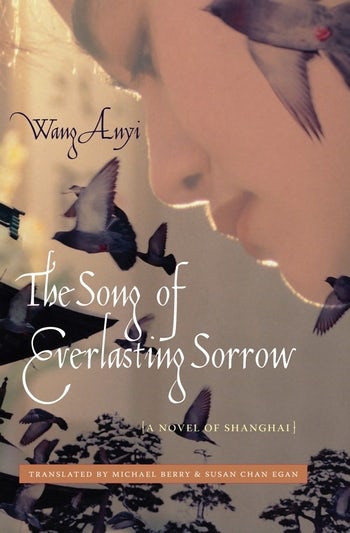 The Song of Everlasting Sorrow

A Novel of Shanghai

Set in post-World War II Shanghai, The Song of Everlasting Sorrow follows the adventures of Wang Qiyao, a girl born of the longtong, the crowded, labyrinthine alleys of Shanghai's working-class neighborhoods.

Infatuated with the glitz and glamour of 1940s Hollywood, Wang Qiyao seeks fame in the Miss Shanghai beauty pageant, and this fleeting moment of stardom becomes the pinnacle of her life. During the next four decades, Wang Qiyao indulges in the decadent pleasures of pre-liberation Shanghai, secretly playing mahjong during the antirightist Movement and exchanging lovers on the eve of the Cultural Revolution. Surviving the vicissitudes of modern Chinese history, Wang Qiyao emerges in the 1980s as a purveyor of "old Shanghai"—a living incarnation of a new, commodified nostalgia that prizes splendor and sophistication—only to become embroiled in a tragedy that echoes the pulpy Hollywood noirs of her youth.

From the violent persecution of communism to the liberalism and openness of the age of reform, this sorrowful tale of old China versus new, of perseverance in the face of adversity, is a timeless rendering of our never-ending quest for transformation and beauty.

Wang Anyi attempts to encapsulate the essence of her metropolis amid decades of twentieth-century vicissitudes. The Song of Everlasting Sorrow: A Novel of Shanghai is unquestionably the most acclaimed novel by one of China's most well-known authors. Michael Berry's translation is executed with care and is true to the original style. Robin Visser, assistant professor of Asian studies, University of North Carolina

A beautifully constructed cyclical narrative... the manner in which character types and events recur against the city's shifting backdrop is impossible to forget. Publishers Weekly (Starred Review)

Michael Berry and Susan Chan Egan's graceful translation... helps us understand why Wang Anyi is one of the most critically acclaimed writers in the Chinese-speaking world. Francine Prose, New York Times Book Review

Certain to take a preeminent place in China's literary canon... The Song of Everlasting Sorrow is at last available in a masterful English translation. World Literature Today

Translators' Notes and Acknowledgments
The Song of Everlasting Sorrow
Afterword, by Michael Berry

Read an >excerpt from The Song of Everlasting Sorrow (pdf)

Commended, 2008 Lois Roth Award for a Translation of a Literary Work

Wang Anyi began her career as a writer in 1978. Her books in English include Lapse of Time, Love in a Small Town, Love on a Barren Mountain, Brocade Valley, and the novel Baotown, which was a finalist for the Los Angeles Times Book of the Year award. She currently lives in Shanghai and is a professor of Chinese literature at Fudan University.

Michael Berry is associate professor of contemporary Chinese cultural studies at the University of California, Santa Barbara. He is the translator of several novels and the author of Jia Zhangke's Hometown Trilogy, A History of Pain: Trauma in Modern Chinese Literature and Film, and Speaking in Images: Interviews with Contemporary Chinese Filmmakers.

Susan Chan Egan, an independent scholar, is the author of A Latterday Confucian: Reminiscences of William Hung 1893-1980 and coauthor of A Pragmatist and His Free Spirit: The Half-Century Romance of Hu Shi and Edith Clifford Williams.