The Songs of Chu

An Anthology of Ancient Chinese Poetry by Qu Yuan and Others 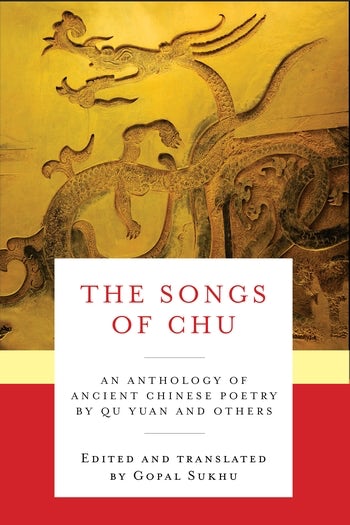 The Songs of Chu

An Anthology of Ancient Chinese Poetry by Qu Yuan and Others

Sources show Qu Yuan (?340–278 BCE) was the first person in China to become famous for his poetry, so famous in fact that the Chinese celebrate his life with a national holiday called Poet's Day, or the Dragon Boat Festival. His work, which forms the core of the The Songs of Chu, the second oldest anthology of Chinese poetry, derives its imagery from shamanistic ritual. Its shaman hymns are among the most beautiful and mysterious liturgical works in the world. The religious milieu responsible for their imagery supplies the backdrop for his most famous work, Li sao, which translates shamanic longing for a spirit lover into the yearning for an ideal king that is central to the ancient philosophies of China.

Qu Yuan was as important to the development of Chinese literature as Homer was to the development of Western literature. This translation attempts to replicate what the work might have meant to those for whom it was originally intended, rather than settle for what it was made to mean by those who inherited it. It accounts for the new view of the state of Chu that recent discoveries have inspired.

The Songs of Chu contain some of the most beautiful language in early Chinese literature. They are also an invaluable source for research on ancient myths, legends, and cosmology. Sukhu's elegant English translation belies years of meticulous scholarship to give the modern reader some sense of the extraordinarily difficult original. A magnificent achievement! Sarah Allan, Dartmouth College

Gopal Sukhu's agile, sensitive new translations of these beautiful and haunting poems and the lucid introductions that accompany them will delight readers of every stripe, while the book's scholarly apparatus, distilling a lifetime's engagement with the notoriously difficult text, will satisfy the most exacting of specialists. The publication of this long-awaited work marks a great event in the field of Chinese literature. John S. Major, cotranslator of The Huainanzi

Transformative, smooth, and beautiful: one reads this book not only as a critical update of scholarship but also for the pure joy of the prose. Constance Cook, author of Death in Ancient China: The Tale of One Man's Journey

Gopal Sukhu is an associate professor of Chinese and comparative literature at Queens College, City University of New York.