The State Strikes Back

The End of Economic Reform in China? 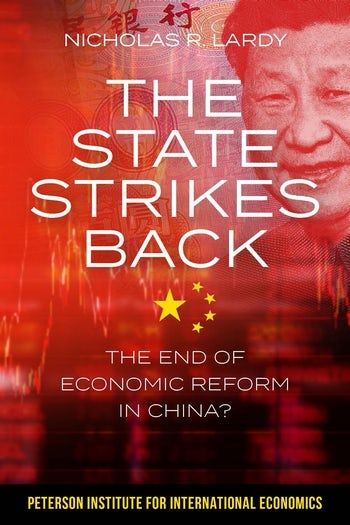 The State Strikes Back

The End of Economic Reform in China?

China’s extraordinarily rapid economic growth since 1978, driven by market-oriented reforms, has set world records and continued unabated, despite predictions of an inevitable slowdown. In The State Strikes Back: The End of Economic Reform in China?, the renowned China scholar Nicholas R. Lardy argues that China’s future growth prospects could be equally bright but are shadowed by the specter of resurgent state dominance, which has begun to diminish the vital role of the market and private firms in China’s economy.

Lardy’s book is a timely sequel to his path-breaking Markets Over Mao: The Rise of Private Business in China (Peterson Institute for International Economics, 2014). This book mobilizes new data to trace how President Xi Jinping has consistently championed state-owned or controlled enterprises, encouraging local political leaders and financial institutions to prop up ailing, underperforming companies that are a drag on China’s potential. As with his previous book, Lardy’s perspective departs from conventional wisdom, especially in its contention that China could achieve a high growth rate for the next two decades—if it reverses course and returns to the path of market-oriented reforms.

In a timely new book, The State Strikes Back, Nicholas Lardy . . . argues that poor policy making is to blame for much of the slowdown since the financial crisis. It’s a development that has deflated the previous optimism of many China-watchers, including the economist himself . . . The most thought-provoking parts of the text . . . attempt to understand not just what happened, but why it happened—and what it means for prospects for future reform. Reuters Breakingviews

[Lardy] presents a strong argument that makes The State Strikes Back worth reading for those seeking to better understand the Chinese economy’s structural challenges. William Foreman, Taiwan Business Topics

Nicholas Lardy, a preeminent expert on China’s economy, argues that China faces a choice: follow the path of market-based reform or retrench to greater state direction. Mindful of the politics surrounding the choice, he makes the case for well-crafted reform, saying it could spur growth greater than most China analysts believe likely. The State Strikes Back is a must-read for policymakers, businesspeople, and investors with an interest in China’s economic future. Robert Rubin, former U.S. Secretary of the Treasury

The State Strikes Back makes a compelling, deeply researched, and lucidly written case that the state is resurgent in China as market-oriented reforms stall. Nicholas Lardy, a preeminent expert on the Chinese economy, provides a balanced and insightful overview that, like his previous works, will become standard reference material for anyone interested in understanding the intricacies of the Chinese economy and policy making process. Eswar S. Prasad, Cornell University

Nicholas Lardy’s book reflects the meticulous research and methodical analysis that has established his reputation as a leading observer of China. ... Lardy is more astute than other analysts in understanding why [Chinese economic] reform has stalled. ... [He] argues convincingly that the widening productivity gap between state-owned enterprises and private groups, combined with the growing role of SOEs in total investment, seriously hinders growth. Financial Times

Nicholas Lardy’s excellent book, The State Strikes Back, could hardly arrive at a better moment. Using careful analysis to challenge common hypotheses, Lardy takes a close look at the principal factors affecting China’s longer-run growth prospects. Ultimately, he is hopeful but realistic: China could sustain its recent pace of growth for an extended period—or grow even faster—but only if the government is willing to return to its earlier commitment to serious reforms that favor market, rather than state, allocation of resources. Kermit Schoenholtz, New York University, and Stephen Cecchetti, Brandeis University

No one knows the Chinese economic data better than Lardy. So when he concludes that, 'absent significant further economic reform . . . China's growth is likely to slow, casting a shadow over its future prospects,' one should take his prediction seriously. CATO Journal

Nicholas R. Lardy, called “everybody’s guru on China” by the <i>National Journal</i>, is the Anthony M. Solomon Senior Fellow at the Peterson Institute for International Economics. He joined the Institute in March 2003 from the Brookings Institution, where he was a senior fellow from 1995 until 2003. He was the director of the Henry M. Jackson School of International Studies at the University of Washington from 1991 to 1995. From 1997 through the spring of 2000, he was also the Frederick Frank Adjunct Professor of International Trade and Finance at the Yale University School of Management. He is author, coauthor, or editor of numerous books, including <i>Markets Over Mao: The Rise of Private Business in China</i> (2014), <i>Sustaining China’s Economic Growth After the Global Financial Crisis</i> (2012), <i>The Future of China’s Exchange Rate Policy</i> (2009), <i>China’s Rise: Challenges and Opportunities</i> (2008), <i>Debating China’s Exchange Rate Policy</i> (2008), and <i>China: The Balance Sheet—What the World Needs to Know Now about the Emerging Superpower</i> (2006). Lardy is a member of the Council on Foreign Relations and of the editorial boards of <i>Asia Policy</i> and the <i>China Review</i>.