The Story of Evolution in 25 Discoveries

The Evidence and the People Who Found It 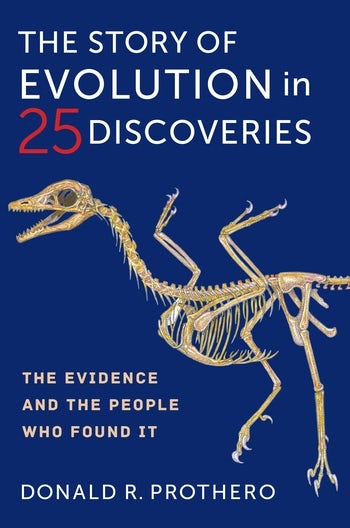 The Story of Evolution in 25 Discoveries

The Evidence and the People Who Found It

The theory of evolution unites the past, present, and future of living things. It puts humanity’s place in the universe into necessary perspective. Despite a history of controversy, the evidence for evolution continues to accumulate as a result of many separate strands of incredible scientific sleuthing.

In The Story of Evolution in 25 Discoveries, Donald R. Prothero explores the most fascinating breakthroughs in piecing together the evidence for evolution. In twenty-five vignettes, he recounts the dramatic stories of the people who made crucial discoveries, placing each moment in the context of what it represented for the progress of science. He tackles topics like what it means to see evolution in action and the distance between species in space and time, following figures from Darwin to lesser-known researchers as they unlock the mysteries of the fossil record, the earth, and the universe. The book also features the stories of animal species strange and familiar, including humans—and our ties to some of our closest relatives and more distant cousins. Prothero’s wide-ranging tales showcase awe-inspiring and bizarre aspects of nature and the powerful insights they give us into the way that life works. Brisk and entertaining while firmly grounded in fundamental science, The Story of Evolution in 25 Discoveries is a captivating read for anyone curious about the evidence for evolution and what it means for humanity.

This is an informative and engaging work about the discovery process, mainly centered around evolution. Readers will be well-informed about why biologists think evolution not only is real, but important for discovering who we are. Prothero provides a useful service in clearing up many misconceptions about evolution. Norman Johnson, author of Darwinian Detectives: Revealing the Natural History of Genes and Genomes

Donald R. Prothero is a paleontology and geology researcher, teacher, and author. He is adjunct professor of geological sciences at California State Polytechnic University, Pomona, and research associate in vertebrate paleontology at the Natural History Museum of Los Angeles County. His Columbia University Press books include The Story of Life in 25 Fossils: Tales of Intrepid Fossil Hunters and the Wonders of Evolution (2015), The Story of the Earth in 25 Rocks: Tales of Important Geological Puzzles and the People Who Solved Them (2018), and The Story of the Dinosaurs in 25 Discoveries: Amazing Fossils and the People Who Found Them (2019).