The Story of the Earth in 25 Rocks

Tales of Important Geological Puzzles and the People Who Solved Them 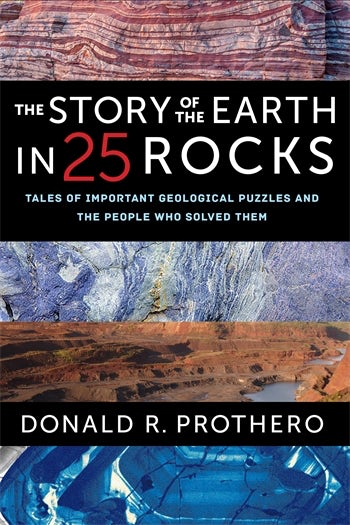 The Story of the Earth in 25 Rocks

Tales of Important Geological Puzzles and the People Who Solved Them

Every rock is a tangible trace of the earth’s past. The Story of the Earth in 25 Rocks tells the fascinating stories behind the discoveries that shook the foundations of geology. In twenty-five chapters—each about a particular rock, outcrop, or geologic phenomenon—Donald R. Prothero recounts the scientific detective work that shaped our understanding of geology, from the unearthing of exemplary specimens to tectonic shifts in how we view the inner workings of our planet.

Prothero follows in the footsteps of the scientists who asked—and answered—geology’s biggest questions: How do we know how old the earth is? What happened to the supercontinent Pangea? How did ocean rocks end up at the top of Mount Everest? What can we learn about our planet from meteorites and moon rocks? He answers these questions through expertly chosen case studies, such as Pliny the Younger’s firsthand account of the eruption of Vesuvius; the granite outcrops that led a Scottish scientist to theorize that the landscapes he witnessed were far older than Noah’s Flood; the salt and gypsum deposits under the Mediterranean Sea that indicate that it was once a desert; and how trying to date the age of meteorites revealed the dangers of lead poisoning. Each of these breakthroughs filled in a piece of the greater puzzle that is the earth, with scientific discoveries dovetailing with each other to offer an increasingly coherent image of the geologic past. Summarizing a wealth of information in an entertaining, approachable style, The Story of the Earth in 25 Rocks is essential reading for the armchair geologist, the rock hound, and all who are curious about the earth beneath their feet.

A natural follow-up to the author’s The Story of Life in 25 Fossils . . . [A] useful introduction to geology. Kirkus Reviews

In 25 short and enjoyable chapters, [Prothero] explores issues that have been at the center of geology since long before geology was a science... Prothero provides thought-provoking historical context for each subject and presents information about the individuals responsible for advancing geological knowledge—including James Hutton, Charles Lyell, and Alfred Wegener—while explaining the underlying science in an accessible manner. Publishers Weekly

I learned something and gained a deeper appreciation for the history of Earth science from reading The Story of the Earth in 25 Rocks. I recommend it to anyone interested in tales of scientific discovery and natural marvels. Physics Today

Skillfully presents a vast array of facts that should appeal to readers newly acquainted with Earth science who are interested in learning a bit more. Choice

The Story of the Earth in 25 Rocks provides twenty-five well-lit doorways into the sometimes dark and imposing edifice of the geologic past. Colorful characters welcome the reader in, revealing the very human nature of scientific inquiry and our long and complicated relationship with rocks. Marcia Bjornerud, author of Reading the Rocks: The Autobiography of Earth

Preface
Acknowledgments
1. Volcanic Tuff: Vulcan’s Wrath: The Eruption of Vesuvius
2. Native Copper: The Iceman and the Island of Copper
3. Cassiterite: The “Isles of Tin” and the Bronze Age
4. Angular Unconformity: “No Vestige of a Beginning”: The Immensity of Geologic Time
5. Igneous Dikes: The “Earth’s Great Heat Engine”: The Origin of Magmas
6. Coal: The Rock That Burns Fires the Industrial Revolution
7. Jurassic World: The Map That Changed the World: William Smith and the Rocks of Britain
8. Radioactive Uranium: Clocks in Rocks: Arthur Holmes and the Age of the Earth
9. Chondritic Meteorites: Messengers From Space: The Origin of the Solar System
10. Iron-Nickel Meteorites: The Cores of Other Planets
11. Moon Rocks: Green Cheese or Anorthosite: The Origin of the Moon
12. Zircons: Early Oceans and Life? Evidence in a Grain of Sand
13. Stromatolites: Microbial Condos: Cyanobacteria and the Oldest Life
14. Banded Iron Formation: Mountains of Iron: The Earth’s Early Atmosphere
15. Turbidites: Archean Sediments and Submarine Landslides
16. Diamictites: Tropical Glaciers and the Snowball Earth
17. Exotic Terranes: Paradox in Rocks: Wandering Fossils and Traveling Landmasses
18. Jigsaw-Puzzle Bedrock: Alfred Wegener and Continental Drift
19. Chalk: The Cretaceous Seaway and Greenhouse Planet
20. The Iridium Layer: The Death of the Dinosaurs
21. Lodestones: How Paleomagic Launched Plate Tectonics
22. Blueschists: The Puzzle of Subduction Zones
23. Transform Faults: Earthquake! The San Andreas Fault
24. Messinian Evaporites: The Mediterranean Was a Desert
25. Glacial Erraticts: A Poet, a Professor, a Politician, a Janitor, and the Discovery of the Ice Ages
Index

Donald R. Prothero has taught paleontology and geology for almost four decades. He is adjunct professor of geological sciences at California State Polytechnic University in Pomona, adjunct professor of geology at Pierce College, and research associate in vertebrate paleontology at the Natural History Museum of Los Angeles County. His Columbia University Press books include Bringing Fossils to Life: An Introduction to Paleobiology (third edition, 2013); The Story of Life in 25 Fossils: Tales of Intrepid Fossil Hunters and the Wonders of Evolution (2015); and Evolution: What the Fossils Say and Why It Matters (second edition, 2017).