The Theory That Changed Everything

"On the Origin of Species" as a Work in Progress 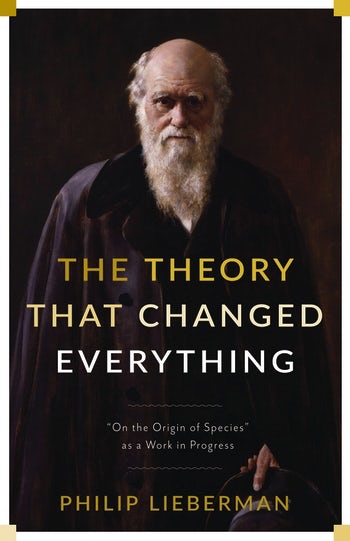 The Theory That Changed Everything

"On the Origin of Species" as a Work in Progress

Few people have done as much to change how we view the world as Charles Darwin. Yet On the Origin of Species is more cited than read, and parts of it are even considered outdated. In some ways, it has been consigned to the nineteenth century. In The Theory That Changed Everything, the renowned cognitive scientist Philip Lieberman demonstrates that there is no better guide to the world’s living—and still evolving—things than Darwin and that the phenomena he observed are still being explored at the frontiers of science.

In an exploration that ranges from Darwin’s transformative trip aboard the Beagle to Lieberman’s own sojourns in the remotest regions of the Himalayas, this book relates fresh, contemporary findings to the major concepts of Darwinian theory, which transcends natural selection. Drawing on his own research into the evolution of human linguistic and cognitive abilities, Lieberman explains the paths that adapted human anatomy to language. He demystifies the role of recently identified transcriptional and epigenetic factors encoded in DNA, explaining how nineteenth-century Swedish famines alternating with years of plenty caused survivors’ grandchildren to die many years short of their life expectancy. Lieberman is equally at home decoding supermarket shelves and climbing with the Sherpas as he discusses how natural selection explains features from lactose tolerance to ease of breathing at Himalayan altitudes. With conversational clarity and memorable examples, Lieberman relates the insights that led to groundbreaking discoveries in both Darwin’s time and our own while asking provocative questions about what Darwin would have made of controversial issues today, such as GMOs, endangered species, and the God question.

Lieberman's The Theory That Changed Everything takes Darwin's theory out of academia's dusty lecture halls, returning it to where it began—with a young person curious about the world around them. Engagingly, Lieberman explains how Darwin developed his theories and why those theories matter today. The final chapter, 'What would Darwin Think About…' will energize high school and college biology classes for years to come. John J. Shea, Stony Brook University

An awesome accompanying book for anyone who reads On the Origin of Species. Rob DeSalle, curator of entomology at the American Museum of Natural History

Strikes a balance between the historical context in which Darwin made his remarkable contributions to science and contemporary scientific work. Christina Behme, Brandon University

An enjoyable and well-written book for those who appreciate Species and its impact on our lives today. Library Journal

Written with an infectious delight in the way that Darwin’s thinking continues to guide scientific inquiry across disciplines. Los Angeles Review of Books

Big brains, language, and almost infinite cultural flexibility are quintessential human features. This lucidly written little gem from a leader in the study of human language evolution uses language as a case study to explain how a Darwinian approach is the only way to understand the evolution of human brains and behavior. Written in a very personal voice, it provides a fully accessible synthesis of research in fields as diverse as linguistics, functional genomics, psychology, neuroanatomy, and evolutionary theory. It makes excellent supplementary reading for a diverse range of courses, from evolutionary biology to anthropology and linguistics. David Pilbeam, Harvard University

Suited for general readers and students interested in the sciences. Choice

Philip Lieberman is George Hazard Crooker University Professor Emeritus in the Department of Cognitive, Linguistic, and Psychological Sciences at Brown University. He is the author of Human Language and Our Reptilian Brain: The Subcortical Bases of Speech, Syntax, and Thought (2002); Toward an Evolutionary Biology of Language (2006); and The Unpredictable Species: What Makes Humans Unique (2013), among other works.