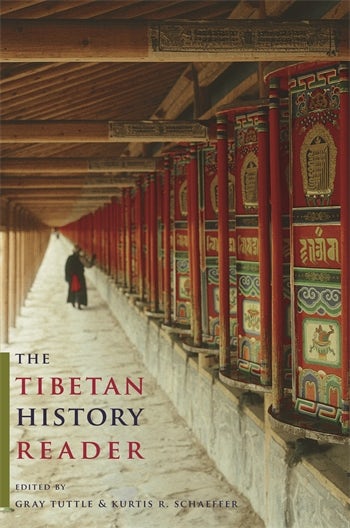 Covering the social, cultural, and political development of Tibet from the seventh century to the modern period, this resource reproduces essential, hard-to-find essays from the past fifty years of Tibetan studies, along with several new contributions. Beginning with Tibet's emergence as a regional power and concluding with its profound contemporary transformations, the collection is both a general and specific history, connecting the actions of individuals, communities, and institutions to broader historical trends shaping Asia and the world. With contributions from American, French, German, Italian, Chinese, Japanese, and Tibetan scholars, the anthology reflects the international character of Tibetan studies and its multiple, interdisciplinary perspectives. By far the most concise scholarly anthology on Tibetan civilization in any Western language, this reader draws a clear portrait of Tibet's history, its relation to its neighbors, and its role in world affairs.

Schaeffer and Tuttle are among the best scholars in the field, and they provide an exemplary selection of expert articles in one convenient, well-integrated, and phonetically readable volume. Bryan J. Cuevas, Florida State University

This single volume offers a thorough education in Tibetan history from the founding of the Tibetan empire in the seventh century through 1951. In thirty-three topical and absorbing essays, leading historians of Asia, Europe, and North America explain exactly what the original documents say and why historians of Tibet interpret them in such dramatically different ways. Anyone who wants to learn more about Tibetan history should begin here. Valerie Hansen, Yale University

There has long been an interest in the Tibetan civilization and, in particular, Tibetan Buddhism. Yet general readers are less familiar with the history and the development of both secular and religious institutions in the Tibetan world. Tuttle and Schaeffer have gathered some of the most current and definitive writings by leading international scholars in the field that demonstrate high-level research on all aspects of Tibetan history over the past decades. These works deal with the earliest period to more recent developments, providing a comprehensive and authoritative survey. The Tibetan History Reader will be an indispensable resource for students and anybody with an interest in Tibet. Tsering Shakya, Institute of Asian Research, University of British Columbia

This book brings together the very best scholarship of the last half century. Supplemented with a useful timeline and an extensive bibliography, The Tibetan History Reader will remain the standard scholarly reference for a long time to come. A real tour de force. José Ignacio Cabezón, University of California Santa Barbara

The material is specialized but animated by a sense of fresh discovery. Foreign Affairs

A very satisfying reading experience, where Tibetan history forms a matrix of interconnected events rather than a mere litany of dates and uncontextualized data.... A superb resource in undergraduate surveys. Bulletin of SOAS

Students and other readers wishing to obtain an overview of the contemporary field of Tibetan Studies could not do better than to get [The Tibetan History Reader and Sources of Tibetan Tradition]. Sam van Schaik, Journal of the American Oriental Society

Preface and Acknowledgments
Dates in Tibetan History and Key Events in Neighboring Lands
Maps
Part I. From Prehistory to History
1. The Prehistory of the Tibetan Plateau to the Seventh Century A.D., by Mark Aldenderfer and Zhang Yinong
2. Some Reflections on the Periodization of Tibetan History, by Bryan Cuevas
3. History as Myth: On the Appropriation of the Past in Tibetan Culture, by Peter Schwieger
Part II. Imperial Tibet (Seventh to Tenth Centuries)
4. Remarks on the Mani Kabum and the Cult of Avalokiteśvara in Tibet, by Matthew T. Kapstein
5. On the Tibetan Historiography and Doxography of the 'Great Debate of Samyé,' by David Seyfort Ruegg.
Imperial Politics
6. The Context of Old Tibetan Inscriptions, by Fang Kuei Li and W. South Coblin
7. The Tibetans in the Ordos and North China: Considerations on the Role of the Tibetan Empire in World History, by Christopher I. Beckwith
Part III. Tibetan Revivals (Tenth to Twelfth Centuries)
8. The Tibetan Tribes of Hexi and Buddhism during the Northern Song Period, by Tsotumo Iwasaki
9. Rulers of Western Tibet, by David Snellgrove
10. The Bön Religion of Tibet, by Per Kvaerne
11. The Evolution of Monastic Power, by R. A. Stein
Part IV. Lamas and Patrons: Tibet and the Mongols (Thirteenth to Fourteenth Centuries)
12. The Preceptor-Donor Relation in Thirteenth Century Tibetan Society and Polity, its Inner Asian Precursors and Indian Models, by David Seyfort Ruegg
13. The Mongol Census in Tibet, by Luciano Petech
14. Sakya Pandita's Letter to the Tibetans: A Late and Dubious Addition to His Collected Works, by David P. Jackson
Part V. Centers of Power and Religious Learning (Fourteenth to Eighteenth Centuries)
15. The Rise of the Pakmodru Dynasty, by Luciano Petech
16. Monastic Patronage in 15th century Tibet, by Turrell V. Wylie
17. Central Tibetan Conflict in the 16th Century, by Guiseppe Tucci
18. The He Clan of Hezhou: A Tibetan Family in Service to the Yuan and Ming Dynasties, by Elliot Sperling
19. Bön in Central and Eastern Tibet, by Samten Karmay
Part VI. Modern Tibet (Seventeenth to Twentieth Centuries)
Central Tibetan Leadership
20. The Dalai Lamas and the Origins of Reincarnate Lamas, by Leonard W. J. van der Kuijp
21. The Fifth Dalai Lama, by Kurtis R. Schaeffer
22. Experience, Empiricism, and the Fortunes of Authority: Tibetan Medicine and Buddhism on the Eve of Modernity, by Janet Gyatso
Tibet and the Manchus
23. The Administration of Tibet during the First Half-Century of Chinese Protectorate, by Luciano Petech
24. Lobjang Danjin's Rebellion of 1723, by Katô Naoto
25. Aristocracy and Government in Tibet: 1728–1959, by Luciano Petech
Trade and Commerce
26. Gold, Wool and Musk: Trade in Lhasa in the Seventeenth Century, by Luce Boulnois
27. The Circulation of Estates in Tibet: Reincarnation, Land and Politics, by Melvyn C. Goldstein
28. The Geo-History of Long-Distance Trade in Tibet 1850–1950, by Wim van Spengen
Institutional Growth beyond Central Tibet
29. The Kingdom of Dergé, by Lauran R. Hartley
30. Labrang: A Tibetan Buddhist Monastery at the Crossroads of Four Civilizations, by Paul Nietupski
Tibet in a Global Context
31. Uniting Religion and Politics in a Bid for Autonomy: Lamas in Exile in China and America, by Gray Tuttle
32. Progressives and Exiles, by Heather Stoddard
33. The Genesis of the Sino-Tibetan Agreement of 1951, by Tsering Shakya
Full References to Original Articles
Bibliography
Index

Gray Tuttle is the Leila Hadley Luce Associate Professor of Modern Tibet in the Department of East Asian Languages and Cultures at Columbia University. He is the author of Tibetan Buddhists in the Making of Modern China and the editor of Mapping the Modern in Tibet, and coeditor, with Kurtis R. Schaeffer and Matthew T. Kapstein, of Sources of Tibetan Tradition.

Kurtis R. Schaeffer is professor and chair of the Department of Religious Studies at the University of Virginia. He is the author of The Culture of the Book in Tibet and Himalayan Hermitess: The Life of a Tibetan Buddhist Nun, and coeditor, with Gray Tuttle and Matthew T. Kapstein, of Sources of Tibetan Tradition.