The Turn Against the Modern 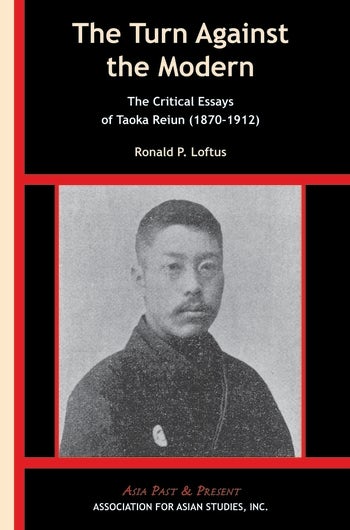 The Turn Against the Modern

The Turn Against the Modern is a biography of the late Meiji social and cultural critic Taoka Reiun (1870–1912) who was known for his fierce attack on modernity. Reiun was convinced that the western conception of modernity in the late nineteenth and early twentieth century was based on an overly narrow, materialistic view of the world—one that placed far too much emphasis on commerce, profit, and utilitarianism—and he believed that this concept was rapidly emptying life of its richness, depth, and meaning. He, therefore, could not help but decry a world that had “squandered its spirit and vitality, forsaken its grandiose visions, and lost its sense of mystery, its very soul!” A careful reader of philosophy, religion, and literature, Reiun embraced a vision of history, society, and the future that marks him as an original and creative thinker whose understanding of what it means to be modern and human remains alive and vital today. This study vividly brings to life an overlooked contrarian whose writings tell us that Japan’s modernization process was much more complex and controversial than the standard ‘Meiji progress narrative’ would have us believe. Taoka Reiun comes through in this exhaustively researched study as a powerful critic who thought capitalist materialism had robbed Japan of its soul—a much-censored opponent of slavish Westernization who insisted that modernity should spring from the creation of autonomous individuals (women as well as men). Loftus’s analysis is incisive; his attention to Reiun’s tumultuous personal life brings special energy to the work.

RONALD P. LOFTUS is Director of the Center for Asian Studies at Willamette University in Salem, OR. He grew up in various parts of the world including India, France, Italy and Thailand. He graduated high-school from the International School of Bangkok and returned to Washington, D.C., to attend George Washington University. After graduating and earning a Master’s Degree from Johns Hopkins SAIS, Loftus entered the Ph.D. program in modern Japanese history at Claremont Graduate School. Since 1977, he has been teaching Japanese language, literature, film, and history at the university level. Research interests include late Meiji social and intellectual history and "self-writing" --- autobiographies and memoirs -- by 20th century Japanese women. He has published two books on the subject: Telling Lives (University of Hawaii press, 2004) on the interwar years and Changing Lives (Association of Asian Studies, 2013) on postwar Japan. In 2013, he was a participant in "Sex, Gender, and Society: Rethinking Modern Japanese Feminisms," a conference held at Emory University on April 19-20, 2013. The conference featured presentations by Japanese Studies specialists engaged in innovative research intended to further our understanding of the diversity and evolution of Japanese feminist thought and activism from the Meiji period to the present day.