Reading and Writing in Japan’s Age of Modern Print Media 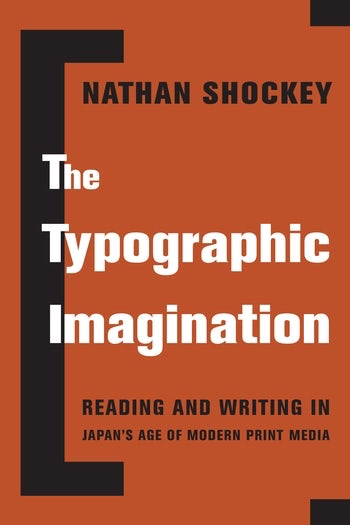 Reading and Writing in Japan’s Age of Modern Print Media

In the early twentieth century, Japan was awash with typographic text and mass-produced print. Over the short span of a few decades, affordable books and magazines became a part of everyday life, and a new generation of writers and thinkers considered how their world could be reconstructed through the circulation of printed language as a mass-market commodity. The Typographic Imagination explores how this commercial print revolution transformed Japan’s media ecology and traces the possibilities and pitfalls of type as a force for radical social change.

Nathan Shockey examines the emergence of new forms of reading, writing, and thinking in Japan from the last years of the nineteenth century through the first decades of the twentieth. Charting the relationships among prose, politics, and print capitalism, he considers the meanings and functions of print as a staple commodity and as a ubiquitous and material medium for discourse and thought. Drawing on extensive archival research, The Typographic Imagination brings into conversation a wide array of materials, including bookseller trade circulars, language reform debates, works of experimental fiction, photo gazetteers, socialist periodicals, Esperanto primers, declassified censorship documents, and printing press strike bulletins. Combining the rigorous close analysis of Japanese literary studies with transdisciplinary methodologies from media studies, book history, and intellectual history, The Typographic Imagination presents a multivalent vision of the rise of mass print media and the transformations of modern Japanese literature, language, and culture.

Nathan Shockey’s study of the typographic imagination in modern Japan reorganizes our sensibilities by seamlessly integrating media studies with modern Japanese literary history and criticism. Its fresh perspective is sure to change the conceptual landscape of Japan specialists, and its rich account of the particularities of modern Japanese print culture will command the attention of media studies scholars as well. Indra Levy, Stanford University

Shockey does an amazing job of chronicling a transformative moment in the history of Japanese literature. Canons were transformed, new classes of readers emerged, and vivacious debates about the meaning and diversity of literature's materiality were produced. This book offers an important addition to the global history of print. Andrew Piper, McGill University

Rich in detail and vast in scope, The Typographic Imagination deftly charts a course through the roiling complexity of print media that collectively generated a typographic effect in the early twentieth century. But the stroke of genius lies in how the perspective of print allows Shockey to overturn our understanding of modernization, highlighting a pulse of nonlinear difference coursing through print media, resurfacing intensified in strange new characters and movements. Thomas Lamarre, Duke University

Shockey’s engaging and erudite study lays out beautifully the complex and changing technological, social, and intellectual landscape that informed Japan’s early modern and modern book worlds. This meticulously researched study expands our understanding of the literary field by interrogating the intersections of script reform, the transition from xylographic to industrial printing, new modes of book classification, and the crucial contributions of leftist movements to literature in the late nineteenth and early twentieth century. Ann Sherif, Oberlin College and Conservatory

The Typographic Imagination is an innovative study whose strengths include scrupulous scholarship, clear prose, and lucid analysis. The book makes a substantial contribution to the field of modern Japanese literary and cultural studies. I recommend it with enthusiasm! Seiji Lippit, University of California, Los Angeles

Acknowledgments
A Note on Romanization and Translation
Introduction: The World Made Type
Part I: The Making of a Modern Media Ecology
1. Pictures and Voices from a Paper Empire
2. Iwanami Shoten and the Enterprise of Eternity
3. The Topography of Typography: Bibliophiles and Used Books in the Print City
Part II: Prose, Language, and Politics in the Type Era
4. New Age Sensations: Yokomitsu Riichi and the Contours of Literary Discourse
5. Brave New Words: Orthographic Reform, Romanization, and Esperantism
6. The Medium Is the Masses: Print Capitalism and the Prewar Leftist Movement
Conclusion: Ends, Echoes, and Inversions
Notes
Selected Bibliography
Index

Nathan Shockey is assistant professor of Japanese at Bard College.