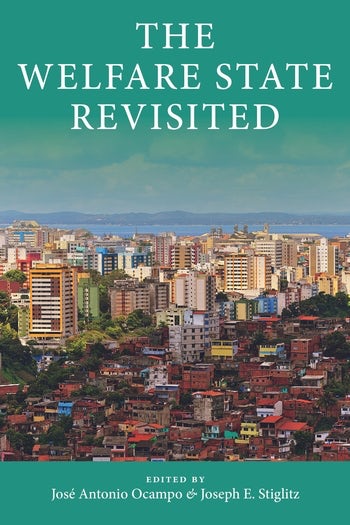 The welfare state has been under attack for decades, but now more than ever there is a need for strong social protection systems—the best tools we have to combat inequality, support social justice, and even improve economic performance. In this book, José Antonio Ocampo and Joseph E. Stiglitz bring together distinguished contributors to examine the global variations of social programs and make the case for a redesigned twenty-first-century welfare state.

The Welfare State Revisited takes on major debates about social well-being, considering the merits of universal versus targeted policies; responses to market failures; integrating welfare and economic development; and how welfare states around the world have changed since the neoliberal turn. Contributors offer prescriptions for how to respond to the demands generated by demographic changes, the changing role of the family, new features of labor markets, the challenges of aging societies, and technological change. They consider how strengthening or weakening social protection programs affects inequality, suggesting ways to facilitate the spread of effective welfare states throughout the world, especially in developing countries. Presenting new insights into the functions the welfare state can fulfill and how to design a more efficient and more equitable system, The Welfare State Revisited is essential reading on the most discussed issues in social welfare today.

A most important volume at a time when the negative political consequences and resulting economic damage of a poorly functioning welfare state are so evidently apparent in several major countries. This book shows how the welfare state should be strengthened and adapted to address the mounting economic, social, and environmental challenges of today’s and, most crucially, tomorrow's world. François Bourguignon, Paris School of Economics, former Chief Economist of the World Bank

The welfare state is under attack in many countries, but as this volume shows with both moral and economic clarity, must be both defended and refashioned for the twenty-first century. Connecting theoretical research on market failure to cross-country evidence showing the welfare state’s promotion of growth and innovation, with specific sections on topics ranging from women’s inclusion in the labor force to retirement security, The Welfare State Revisited is invaluable for experts and practitioners alike. Felicia Wong, president and CEO, Roosevelt Institute

Acronyms
Preface
Part I
1. The Welfare State in the Twenty-First Century, by Joseph E. Stiglitz
2. Adapting Labor and Social Protection Systems to Twenty-First-Century Capitalism, by Sandra Polaski
3. The Welfare State in the Twenty-First Century: Latest Trends in Social Protection, by Isabel Ortiz
4. Supporting Equal Opportunities Through Laws and Policies: Global Progress and Persisting Challenges, by Jody Heymann and Aleta Sprague
5. The Sustainable Development Goals, Domestic Resource Mobilization, and the Poor, by Nora Lustig
6. Intra-Household Inequality and Overall Inequality, by Ravi Kanbur
7. Human Capital, Inequality, and Growth, by Torben M. Andersen
Part II
8. The EU Welfare State: Past, Present, and Future, by Elva Bova and Ernst Stetter
9. Visible Costs and Hidden Gains, by Kalle Moene
10. Social Protection Systems in Latin America: Toward Universalism and Redistribution, by José Antonio Ocampo and Natalie Gómez-Arteaga
11. Social Protection in Latin America: Some Challenges for Reducing Inequality, by Ana Sojo
12. Do Competitive Markets of Individual Savings Accounts and Health Insurance Work as Part of the Welfare State?, by Andras Uthoff
13. Innovations in Protecting the Old: Mostly Social Insurance and Some Assets, by Teresa Ghilarducci
14. Universal Basic Income and the Welfare State, by Richard McGahey
15. Employment Guarantee in the Age of Precarity: The Case of India’s NREGA, by Amit Basole and Arjun Jayadev
Contributors
Index

José Antonio Ocampo is codirector of Banco de la Republica (Colombia’s central bank), professor in the School of International and Public Affairs (on leave for public service), and copresident of the Initiative for Policy Dialogue at Columbia University. He formerly held a number of positions with the United Nations and the government of Colombia. His books with Columbia University Press are Growth and Policy in Developing Countries: A Structuralist Approach (2009, coauthor), Development Cooperation in Times of Crisis (2012, coedited with José Antonio Alonso), and Too Little, Too Late: The Quest to Resolve Sovereign Debt Crises (2016, also coedited with Joseph E. Stiglitz).