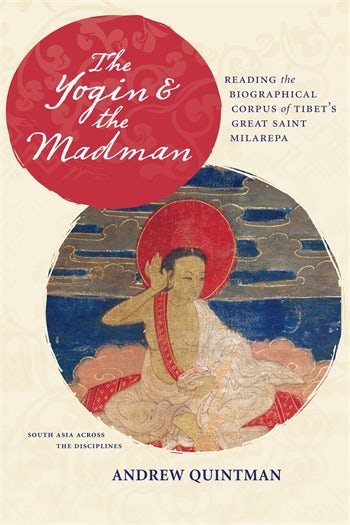 Tibetan biographers began writing Jetsun Milarepa's (1052–1135) life story shortly after his death, initiating a literary tradition that turned the poet and saint into a model of virtuosic Buddhist practice throughout the Himalayan world. Andrew Quintman traces this history and its innovations in narrative and aesthetic representation across four centuries, culminating in a detailed analysis of the genre's most famous example, composed in 1488 by Tsangnyön Heruka, or the "Madman of Western Tibet." Quintman imagines these works as a kind of physical body supplanting the yogin's corporeal relics.

Quintman is the leading authority on the Milarepa story, and this book is the most important contribution to our understanding of this great narrative's rich history to date. Kurtis R. Schaeffer, University of Virginia

The most important study yet published about the literary tradition surrounding the greatest single work in Tibetan literature. It does more than any previous study to give historical access to the life (and lives) of Tibet's most revered and influential yogin and poet. Roger R. Jackson, Carleton College

This book studies the making of perhaps the greatest masterpiece in Tibetan history. Quintman shows how a bare account of events is transformed into a human story that touches the lives of both its author and its avid readers, making a signal contribution to the study of literature and its place in religion. Janet Gyatso, Harvard Divinity School

The Yogin and the Madman is a treasure trove for anyone, who wishes to learn more about literary traditions in the Himalayas, Buddhist history, and about the life of Milarepa. Kuensel

Quintman's work represents a groundbreaking achievement in the presentation of Tibetan biographies to a wider audience. His command of both Tibetan and Tibetan Buddhism ensures a solid presentation of complex and wide-ranging material, and his deep knowledge of literary theory broadens the reader's understanding of sacred biography in general. Cécile Ducher, Bulletin of the School of Oriental and African Studies

[A] masterful study. Janet Gyatso, The Journal of Asian Studies

Winner, 2017 Award for Excellence in the Study of Religion for Textual Studies

Andrew Quintman is associate professor of Religious Studies at Wesleyan University. He is the author of The Yogin and the Madman: Reading the Biographical Corpus of Tibet’s Great Saint Milarepa (Columbia University Press 2014).