Things with a History

Transcultural Materialism and the Literatures of Extraction in Contemporary Latin America 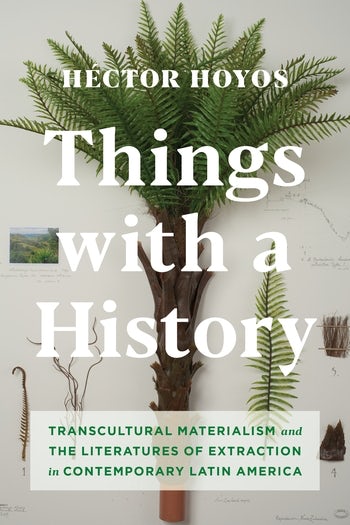 Things with a History

Transcultural Materialism and the Literatures of Extraction in Contemporary Latin America

Can rubber trees, silicone dolls, corpses, soil, subatomic particles, designer shoes, and discarded computers become the protagonists of contemporary literature—and what does this tell us about the relationship between humans and objects? In Things with a History, Héctor Hoyos argues that the roles of objects in recent Latin American fiction offer a way to integrate materialisms old and new, transforming our understanding of how things shape social and political relations.

Discussing contemporary authors including Roberto Bolaño, Ariel Magnus, César Aira, and Blanca Wiethüchter as well as classic writers such as Fernando Ortiz and José Eustasio Rivera, Hoyos considers how Latin American literature has cast things as repositories of history, with an emphasis on the radically transformed circulation of artifacts under globalization. He traces a tradition of thought, transcultural materialism, that draws from the capacity of literary language to defamiliarize our place within the tangible world. Hoyos contrasts new materialisms with historical-materialist approaches, exposing how recent tendencies sometimes sidestep concepts such as primitive accumulation, commodity fetishism, and conspicuous consumption, which have been central to Latin American history and literature. He contends that an integrative approach informed by both historical and new materialisms can balance seeing things as a means to reveal the true nature of social relations with appraisals of things in their autonomy. Things with a History simultaneously offers a sweeping account of the material turn in recent Latin American culture and reinvigorates social theory and cultural critique.

In this singular book, Hoyos unveils a world of unexplored relations between subjects, objects, materiality, and immateriality. He explores the social pact between words and things. Through the idea of transcultural materialism, Hoyos discusses how contemporary Latin American literature mobilizes cultural meanings to illuminate moments in an exploitative global economy. The book deploys a sophisticated web of literary genealogies, as well as theories of materialism, and engages us in new conversations on literature in the global context. Graciela Montaldo, Columbia University

Things with a History provides a fresh optic on the new materialisms of our time and on the history of things (rubber, cell phones, corpses) that have shaped the history of our present. Héctor Hoyos engages a wonderful range of contemporary Latin American authors and a powerful tradition attuned to both nonhuman agency and human responsibility, unwilling to unlearn the lessons of historical materialism. Grappling with these regional “literatures of extraction” as a political ecologist, Hoyos contributes to today’s most pressing critical conversations. Bill Brown, author of Other Things

Ambitiously conceptualized and beautifully written, Things with a History takes up the formidable task of connecting the humanities with material science and biology and succeeds in opening up new spaces for critique. Hoyos offers provocative pairings of overconsumption and hunger, abundance and scarcity, overextraction and underutilization. By reading a dazzling array of authors and thinkers from Latin America and beyond, Hoyos demonstrates, with uncommon facility, the urgent need for an engaged world literary politics. B. Venkat Mani, author of Recoding World Literature: Libraries, Print Culture, and Germany's Pact with Books

Héctor Hoyos is associate professor of Latin American literature and culture at Stanford University. He is the author of Beyond Bolaño: The Global Latin American Novel (Columbia, 2015).