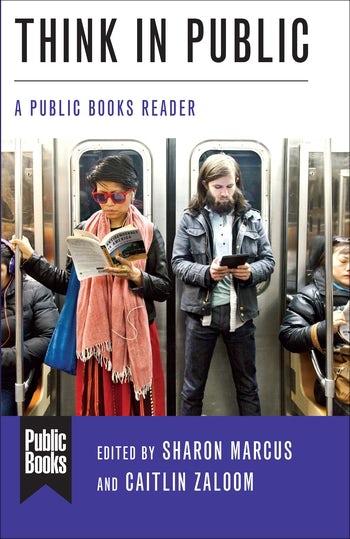 Since 2012, Public Books has championed a new kind of community for intellectual engagement, discussion, and action. An online magazine that unites the best of the university with the openness of the internet, Public Books is where new ideas are debuted, old facts revived, and dangerous illusions dismantled. Here, young scholars present fresh thinking to audiences outside the academy, accomplished authors weigh in on timely issues, and a wide range of readers encounter the most vital academic insights and explore what they mean for the world at large.

Think in Public: A Public Books Reader presents a selection of inspiring essays that exemplify the magazine’s distinctive approach to public scholarship. Gathered here are Public Books contributions from today’s leading thinkers, including Jill Lepore, Imani Perry, Kim Phillips-Fein, Salamishah Tillet, Jeremy Adelman, N. D. B. Connolly, Namwali Serpell, and Ursula K. Le Guin. The result is a guide to the most exciting contemporary ideas about literature, politics, economics, history, race, capitalism, gender, technology, and climate change by writers and researchers pushing public debate about these topics in new directions. Think in Public is a lodestone for a rising generation of public scholars and a testament to the power of knowledge.

This timely, innovative, and important collection represents the best of public scholarship. The stunning essays in this volume demonstrate the significance of Public Books as a crucial online space for anyone committed to engaging ideas that shape the world in which we live. The sheer brilliance and vitality of this digital platform boldly shine through every page of this book. Keisha N. Blain, author of Set the World on Fire: Black Nationalist Women and the Global Struggle for Freedom

An astonishing collection. Eloquent, expansive, provocative, and essential. Rob Nixon, author of Slow Violence and the Environmentalism of the Poor

This book is a call to arms. We must tear down the ivory tower, discard attachments to credentials and prestige, and share ideas across borders, disciplines, and party lines. Think in Public does just this, engaging readers in conversations between today’s top scholars, the works that inspire them, and the watershed issues of our day. Lisa Wade, author of American Hookup: The New Culture of Sex on Campus

That splendid cover image underlines the fact that this book is meant for everyone, not just residents of ivory towers. Toronto Star

Introduction, by Sharon Marcus and Caitlin Zaloom
Part I. Ask in Public
On Accelerationism, by Fred Turner
Justice for Data Janitors, by Lilly Irani
Anthropocene and Empire, by Stacey Balkan
Changing Climates of History, by J. R. McNeill
The Year of Black Memoir, by Imani Perry
Pop Justice, by Frances Negrón-Muntaner
A Black Power Method, by N. D. B. Connolly
Soft Atheism, by Matthew Engelke
Where Do Morals Come From?, by Philip Gorski
The Alchemy of Finance, by Kim Phillips-Fein
How Gentrifiers Gentrify, by Max Holleran
Syria’s Wartime Famine at 100: “Martyrs of the Grass”, by Najwa al-Qattan
The Mortal Marx, by Jeremy Adelman
Who Segregated America?, by Destin Jenkins
The Invention of the “White Working Class”, by Andrew J. Perrin
Going Deep: Baseball and Philosophy, by Kieran Setiya
The World Silicon Valley Made, by Shannon Mattern
Part II. Think in Public
Jill Lepore on the Challenge of Explaining Things: An Interview, by B. R. Cohen
James Baldwin’s Istanbul, by Suzy Hansen
When Stuart Hall Was White, by James Vernon
An Interview with Former Black Panther Lynn French , by Salamishah Tillet
Black Intellectuals and White Audiences, by Matthew Clair
Can There Be a Feminist World?, by Gayatri Chakravorty Spivak
The Story’s Where I Go: An Interview with Ursula K. Le Guin, by John Plotz
Thinking Critically About Critical Thinking, by Christopher Schaberg
If You’re Woke You Dig It: William Melvin Kelley, by Eli Rosenblatt
Translating the Untranslatable: An Interview with Barbara Cassin, by Rebecca L. Walkowitz
My Neighbor Octavia, by Sheila Liming
Stop Defending the Humanities, by Simon During
Painting While Shackled to a Floor, by Nicole R. Fleetwood
Part III. Read in Public
To Translate Is to Betray: On Elena Ferrante, by Rebecca Falkoff
What Global English Means for World Literature, by Haruo Shirane
The Stranger’s Voice, by Karl Ashoka Britto
Can’t Stop Screaming, by Judith Butler
The Model-Minority Bubble, by Joseph Jonghyun Jeon
Free Is and Free Ain’t, by Salamishah Tillet
The Mixed-Up Kids of Mrs. E. L. Konigsburg, by Marah Gubar
In the Great Green Room: Margaret Wise Brown and Modernism, by Anne E. Fernald
Afrofuturism: Everything and Nothing, by Namwali Serpell
Chick Lit Meets the Avant-Garde, by Tess McNulty
Feeling Like the Internet, by Mark McGurl
The People v. O. J. Simpson as Historical Fiction, by Nicholas Dames
Kafka: The Impossible Biography, by Jan Mieszkowski
Shirley Jackson’s Two Worlds, by Karen Dunak
Reading to Children to Save Ourselves, by Daegan Miller
List of Contributors

Sharon Marcus and Caitlin Zaloom are the founders and editors in chief of Public Books. Marcus is Orlando Harriman Professor of English and Comparative Literature at Columbia University. Her books include Between Women: Friendship, Desire, and Marriage in Victorian England (2007) and The Drama of Celebrity (2019). Zaloom is associate professor of social and cultural analysis at New York University. She is the author of Out of the Pits: Traders and Technology from Chicago to London (2006) and Indebted: How Families Make College Work at Any Cost (2019).