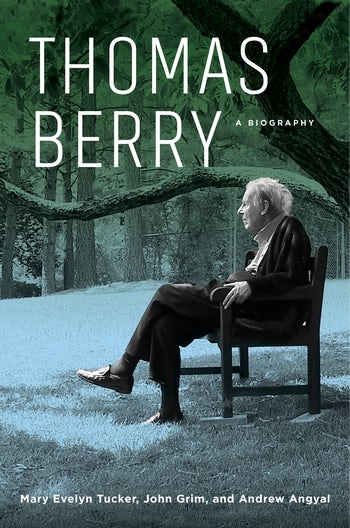 Thomas Berry (1914–2009) was one of the twentieth century’s most prescient and profound thinkers. As a cultural historian, he sought a broader perspective on humanity’s relationship to the earth in order to respond to the ecological and social challenges of our times. This first biography of Berry illuminates his remarkable vision and its continuing relevance for achieving transformative social change and environmental renewal.

Berry began his studies in Western history and religions and then expanded to include Asian and indigenous religions, which he taught at Fordham University, Barnard College, and Columbia University. Drawing on his explorations of history, he came to see the evolutionary process as a story that could help restore the continuity of humans with the natural world. Berry urged humans to recognize their place on a planet with complex ecosystems in a vast, evolving universe. He sought to replace the modern alienation from nature with a sense of intimacy and responsibility. Berry called for new forms of ecological education, law, and spirituality, as well as the creation of resilient agricultural systems, bioregions, and ecocities. At a time of growing environmental crisis, this biography shows the ongoing significance of Berry’s conception of human interdependence with the earth as part of the unfolding journey of the universe.

A warm celebration of an environmentalist whose ideas are increasingly relevant. Kirkus Reviews

I urge you to pick up this book and read it cover to cover. Thomas Crowe, Smoky Mountain News

In this new biography of Thomas Berry, the authors provide a rich, comprehensive narrative of one of the great thinkers of the twentieth century . . . This is an important book at a time when climate change remains politically divisive and global warming continues unabated. Ilia Delio, OSF, Villanova University, American Catholic Studies

A tour de force biography: Thomas Berry was one of the most important thinkers on humanity and our trajectory on this wondrous living planet—and indeed in the journey of the universe. This is a book written with love and clarity and belongs on everyone’s required reading list. Read it and you will understand one of the most inspiring persons of our time—and it will change how you think about the future. Thomas E. Lovejoy, University Professor, George Mason University

This is a book one has waited impatiently for: some of our finest environmental historians of religion telling the epic intellectual and human story of Thomas Berry. Most biographies illuminate the past, but this one helps chart the course for our future. Bill McKibben, author of Falter: Has the Human Game Begun to Play Itself Out?

To a bewildered world, Thomas Berry offers a moral compass. To a fragmented world, he offers the convergence of scientific and spiritual worldviews in a new story of the evolutionary unity of humans and the cosmos. For a despairing world, he offers meaning and hope in lives of Great Work. For a suffering world, he offers a new jurisprudence of Earth rights. As Thomas Berry was a brilliant, erudite, joyous person who changed the world, so this biography is a brilliant, erudite, joyous book that will change your life. Kathleen Dean Moore, author of Great Tide Rising: Towards Clarity and Moral Courage in a Time of Planetary Change

To read this magnificent biography is to encounter the evolution of greatness, for Thomas Berry was truly one of the remarkable people of the twentieth century. The distinguished authors chronicle his early life to his study of the world’s religions, to the tragedy of ecological loss and the story of the unfolding universe. This is followed by a series of fascinating essays probing Berry's large intellectual legacy. Throughout, Berry's decency and humanity, as well as his courage, are vividly displayed. I found this book to be a joy and an inspiration. James Gustave Speth, cofounder of National Resources Defense Council and World Resources Institute, former administrator of United Nations Development Programme

In my first meeting with Thomas Berry, I sensed a depth of wisdom that was comprehensive and unique. This initial intuition only deepened as we worked together over decades. There is no better pathway into his vision than this profound biography. Brian Thomas Swimme, coauthor, with Thomas Berry, of The Universe Story: From the Primordial Flaring Forth to the Ecozoic Era—A Celebration of the Unfolding of the Cosmos

This book gives tribute to an important thinker who influenced and shaped the fields of cross-cultural studies, religion, and ecology in the twentieth century. The intellectual endeavor of Thomas Berry articulates the failings of the Eurocentric nation-state model and urges listening to the unintended consequences of human hegemony over the natural order of the world. Christopher Key Chapple, Doshi Professor of Indic and Comparative Theology, Loyola Marymount University

Acknowledgments
Introduction: Thomas Berry and the Arc of History
1. An Independent Youth
2. The Call to Contemplation
3. Studying History and Living History
4. The Struggle to Teach
5. From Human History to Earth History
6. From New Story to Universe Story
7. Evoking the Great Work
8. Coming Home
Interlude: The Arc of a Life
9. Narratives of Time
10. Teilhard and the Zest for Life
11. Confucian Integration of Cosmos, Earth, and Humans
12. Indigenous Traditions of the Giving Earth
Epilogue
Appendix: Thomas Berry Timeline, 1914–2009
Notes
Bibliography
Index

Mary Evelyn Tucker and John Grim teach at the Yale School of Forestry and Environmental Studies and the Yale Divinity School, where they direct the Yale Forum on Religion and Ecology. They worked closely with Thomas Berry for over thirty years as his students, editors, and literary executors and are the managing trustees of the Thomas Berry Foundation. In 2019, the International Society for the Study of Religion, Nature, and Culture selected them as recipients of the Lifetime Achievement Award.

Andrew Angyal is professor emeritus of English and environmental studies at Elon University. He is also the author of Loren Eisley (1983), Lewis Thomas (1989), and Wendell Berry (1995).