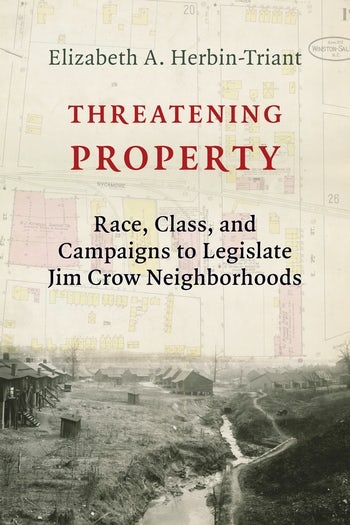 White supremacists determined what African Americans could do and where they could go in the Jim Crow South, but they were less successful in deciding where black people could live because different groups of white supremacists did not agree on the question of residential segregation. In Threatening Property, Elizabeth A. Herbin-Triant investigates early-twentieth-century campaigns for residential segregation laws in North Carolina to show how the version of white supremacy supported by middle-class white people differed from that supported by the elites. Class divides prevented Jim Crow from expanding to the extent that it would require separate neighborhoods for black and white southerners as in apartheid South Africa.

Herbin-Triant details the backlash against the economic successes of African Americans among middle-class whites, who claimed that they wished to protect property values and so campaigned for residential segregation laws both in the city and the countryside, where their actions were modeled on South Africa’s Natives Land Act. White elites blocked these efforts, primarily because it was against their financial interest to remove the black workers that they employed in their homes, farms, and factories. Herbin-Triant explores what the split over residential segregation laws reveals about competing versions of white supremacy and about the position of middling whites in a region dominated by elite planters and businessmen. An illuminating work of social and political history, Threatening Property puts class front and center in explaining conflict over the expansion of segregation laws into private property.

Herbin-Triant tackles a surprisingly neglected aspect of the Jim Crow era—efforts to impose residential segregation in urban and rural areas. Insightfully integrating considerations of race and class and probing how they intersected with the defense of property rights, she sheds new light on attempts to legally separate blacks and whites. An important contribution to southern and American history. Eric Foner, Columbia University

Paying careful attention to social and legal processes in urban and rural contexts, Threatening Property refutes the often-unexamined notion that the rise of de jure segregation unified whites and subordinated blacks. In this pathbreaking study, Herbin-Triant reveals a crucial avenue of research for scholars and points the way forward. Kenneth Mack, author of Representing the Race: The Creation of the Civil Rights Lawyer

Skillfully combining local and transnational approaches, Threatening Property reveals the class struggle underlying campaigns for residential segregation in the South, shattering the myth of a unity of interests among white southerners. Following in the tradition of C. Vann Woodward, Elizabeth Herbin-Triant offers a nuanced and sophisticated analysis of Jim Crow’s contested career. Adrienne Monteith Petty, author of Standing Their Ground: Small Farmers in North Carolina Since the Civil War

When Clarence Poe of the Progressive Farmer launched his 1913 campaign to segregate the rural south, it divided opinion in surprising ways. In her nuanced, well-supported, and crisply written social history, Elizabeth Herbin-Triant explores the intersection of race, class, and ideological fault lines in this story of strange bedfellows. Mark Schultz, author of The Rural Face of White Supremacy: Beyond Jim Crow

Elizabeth A. Herbin-Triant is assistant professor of history at the University of Massachusetts Lowell.