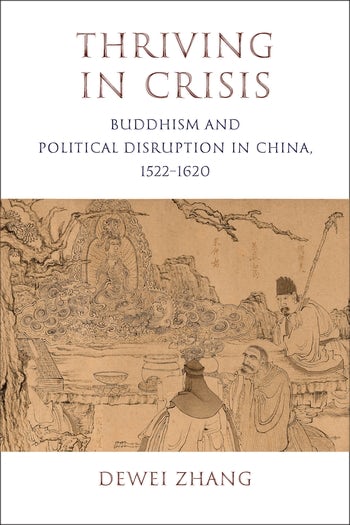 Late imperial Chinese Buddhism was long dismissed as having declined from the glories of Buddhism during the Sui and Tang dynasties (581–907). In recent scholarship, a more nuanced picture of late Ming-era Buddhist renewal has emerged. Yet this alternate conception of the history of Buddhism in China has tended to focus on either doctrinal contributions of individual masters or the roles of local elites in Jiangnan, leaving unsolved broader questions regarding the dynamics and mechanism behind the evolution of Buddhism into the renewal.

Thriving in Crisis is a systematic study of the late Ming Buddhist renewal with a focus on the religious and political factors that enabled it to happen. Dewei Zhang explores the history of the boom in enthusiasm for Buddhism in the Jiajing-Wanli era (1522–1620), tracing a pattern of advances and retrenchment at different social levels in varied regions. He reveals that the Buddhist renewal was a dynamic movement that engaged a wide swath of elites, from emperors and empress dowagers to eunuchs and scholar-officials. Drawing on a range of evidence and approaches, Zhang contends that the late Ming renewal was a politically driven exception to a longer-term current of disfavor toward Buddhism and that it failed to establish Buddhism on a foundation solid enough for its future development. A groundbreaking interdisciplinary study, Thriving in Crisis provides a new theoretical framework for understanding the patterns of Buddhist history in China.

In this absorbing and beautifully crafted study, Dewei Zhang analyzes Buddhism's entanglement with elite politics during the volatile later reigns of the Ming dynasty. By treating local variations with careful precision while keeping his eye on the larger picture of Buddhism's rise and decline, he shows how the Buddhist renewal of the late Ming depended on where and who you were. It has been a decade since Ming Buddhism has been the subject of such a penetrating and original analysis. Timothy Brook, author of Great State: China and the World

This book examines the interlocked relationships between Buddhism and social-political forces. Focusing on a delimited time span of one hundred years (1522-1620), the author uses case studies and quantitative analysis to show the roles emperors and empresses, inner court women and eunuchs, eminent monks, and scholar-officials played in the different trajectories Beijing and Jiangnan underwent in the revival of Buddhism. Zhang offers a sophisticated explanation about what late Ming Buddhist revival means, as well as how and why it happened. The book makes a major contribution to our understanding of late Ming Buddhism. Chün-fang Yü, author of The Renewal of Buddhism in China: Zhuhong and the Late Ming Synthesis

The vibrant religious environment of late Ming Buddhism has up until now mainly been approached through the words and deeds of its most famous personalities. Dewei Zhang takes us one step further with his painstaking research into the social, political, and economic situation within which Buddhism flourished. No reader will come away from this book without a much better informed and better balanced sense of this important epoch in Chinese history. T. H. Barrett, author of The Woman Who Discovered Printing

Thriving in Crisis is a groundbreaking monograph that will provide a template for future studies in the Ming period, which is still little studied and deserving of much more attention. While previous studies have tended to focus on single figures or texts, this book offers a broad reach that will inspire further work. Albert Welter, author of Religion, Culture, and the Public Sphere in China and Japan

This rich and nuanced study offers an entirely new perspective on how Buddhist institutions navigated a particularly tumultuous period of Chinese history. Zhang paints a vivid and detailed portrait of the key monastic figures and their patrons at court and in local society. Thriving in Crisis is an impressive work of scholarship. James A. Benn, author of Burning for the Buddha: Self-Immolation in Chinese Buddhism

Dewei Zhang is an associate professor at Jinan University in Guangzhou. He holds two PhDs, in Chinese philosophy from Peking University and in East Asian Buddhism from the University of British Columbia.