Time and the Other

How Anthropology Makes Its Object, With a New Postscript by the Author 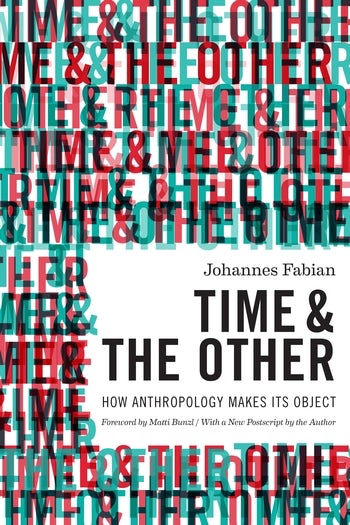 Time and the Other

How Anthropology Makes Its Object, With a New Postscript by the Author

Time and the Other is a classic work that critically reexamined the relationship between anthropologists and their subjects and reoriented the approach literary critics, philosophers, and historians took to the study of humankind. Johannes Fabian challenges the assumption that anthropologists live in the "here and now," that their subjects live in the "there and then," and that the "other" exists in a time not contemporary with our own. He also pinpoints the emergence, transformation, and differentiation of a variety of uses of time in the history of anthropology that set specific parameters between power and inequality. In this edition, a new postscript by the author revisits popular conceptions of the "other" and the attempt to produce and represent knowledge of other(s).
Foreword: Syntheses of a Critical Anthropology, by Matti Bunzl
Preface to the Reprint Edition
Preface and Acknowledgments
1. Time and the Emerging Other
2. Our Time, Their Time, No Time: Coevalness Denied
3. Time and Writing About the Other
4. The Other and the Eye: Time and the Rhetoric of Vision
5. Conclusions
Postscript: The Other Revisited
Notes
References Cited
Index

Johannes Fabian is professor emeritus of cultural anthropology at the University of Amsterdam. His books include Out of Our Minds: Reason and Madness in the Exploration of Central Africa; Memory Against Culture: Arguments and Reminders; Anthropology with an Attitude: Critical Essays; and Ethnography as Commentary: Writing from the Virtual Archive.

Matti Bunzl is professor of anthropology and history at the University of Illinois at Urbana–Champaign and the author of Anti-Semitism and Islamophobia: Hatreds Old and New in Europe.