Albert Shanker and the Battles Over Schools, Unions, Race, and Democracy 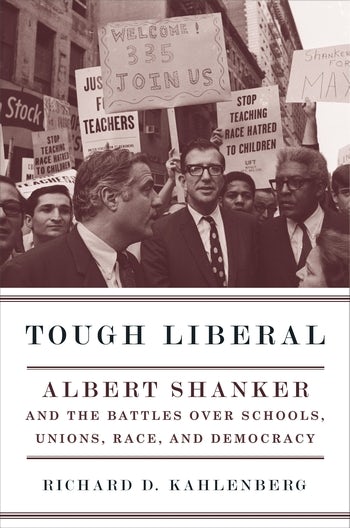 Albert Shanker and the Battles Over Schools, Unions, Race, and Democracy

In Woody Allen's 1973 film, Sleeper, a character wakes up in the future to learn that civilization was destroyed when "a man by the name of Albert Shanker got hold of a nuclear warhead." Shanker was condemned by many when he shut down the New York City school system in the bitter strikes of 1967 and 1968, and he was denounced for stirring up animosity between black parents and Jewish teachers. Later, however, he built alliances with blacks, and at the time of his death in 1997, such figures as Bill Clinton celebrated Shanker for being an educational reformer, a champion of equality, and a promoter of democracy abroad.

Shanker lived the lives of several men bound into one. In his early years, he was the "George Washington of the teaching profession," helping to found modern teacher unionism. During the 1980s, as head of the American Federation of Teachers, he became the nation's leading education reformer. Shanker supported initiatives for high education standards and accountability, teacher-led charter schools, and a system of "peer review" to weed out inadequate teachers. Throughout his life, Shanker also fought for "tough liberalism," an ideology favoring public education and trade unions but also colorblind policies and a robust anticommunismall of which, Shanker believed, were vital to a commitment to democracy.

Although he had a coherent worldview, Shanker was a complex individual. He began his career as a pacifist but evolved into a leading defense and foreign policy hawk. He was an intellectual and a populist; a gifted speaker who failed at small talk; a liberal whose biggest enemies were often on the left; a talented writer who had to pay to have his ideas published; and a gruff unionist who enjoyed shopping and detested sports. Richard D. Kahlenberg's biography is the first to offer a complete narrative of one of the most important voices in public education and American politics in the last half century. At a time when liberals are accused of not knowing what they stand for, Tough Liberal illuminates an engaging figure who suggested an alternative liberal path.

This book is a must-read for those interested in educational or labor history. Historian

At once exquisitely complex and grandly contextual. Martin Peretz, The New Republic

An engaging book, and essential reading for anyone interested in the history of Cold War liberalism and its complicated legacy. Scott McLemee, Inside Higher Ed

A must read for unionists, educators, politicians and democracy internationalists trying to make sense of the persistent failings of U.S. education. Eugenia Kemble, Democratiya

[This book] is an important contribution to the history of American education reform. Nathan Glazer, Education Next

An important new biography. The Politico

A must-read for those interested in educational or labor history. Historian

Richard D. Kahlenberg is a senior fellow at The Century Foundation and the author of All Together Now: Creating Middle-Class Schools through Public School Choice; The Remedy: Class, Race, and Affirmative Action; and Broken Contract: A Memoir of Harvard Law School.