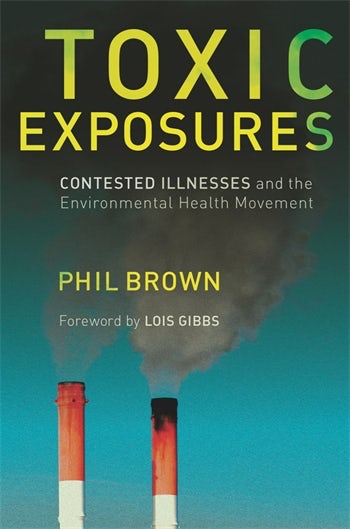 The increase in environmentally induced diseases and the loosening of regulation and safety measures have inspired a massive challenge to established ways of looking at health and the environment. Communities with disease clusters, women facing a growing breast cancer incidence rate, and people of color concerned about the asthma epidemic have become critical of biomedical models that emphasize the role of genetic makeup and individual lifestyle practices. Likewise, scientists have lost patience with their colleagues' and government's failure to adequately address environmental health issues and to safeguard research from corporate manipulation.

Focusing specifically on breast cancer, asthma, and Gulf War-related health conditions-"contested illnesses" that have generated intense debate in the medical and political communities-Phil Brown shows how these concerns have launched an environmental health movement that has revolutionized scientific thinking and policy. Before the last three decades of widespread activism regarding toxic exposures, people had little opportunity to get information. Few sympathetic professionals were available, the scientific knowledge base was weak, government agencies were largely unprepared, laypeople were not considered bearers of useful knowledge, and ordinary people lacked their own resources for discovery and action.

Brown argues that organized social movements are crucial in recognizing and acting to combat environmental diseases. His book draws on environmental and medical sociology, environmental justice, environmental health science, and social movement studies to show how citizen-science alliances have fought to overturn dominant epidemiological paradigms. His probing look at the ways scientific findings are made available to the public and the changing nature of policy offers a new perspective on health and the environment and the relationship among people, knowledge, power, and authority.

Environmental activists, wannabe activists, and folks tired of environmental hazards in their communities will find this a worthwhile guide for action. Library Journal

A guidebook for those wishing to understand the environmental-health movement. Sandra Steingraber, Times Literary Supplement

Toxic Exposures is one of the most important books I have read in a long time. David Naguib Pellow, Mobilization

[Toxic Exposures] rightfully belongs on the shelf next to other books on contemporary issues in medicine. Russ Lopez, Journal of the American Medical Association

Foreword by Lois Gibbs
Preface: Toxic Exposures and the Challenge of Environmental Health

2. Breast Cancer: A Powerful Movement and a Struggle for Science

4. Gulf War-Related Illnesses and the Hunt for Causation: The "Stress of War" Versus the "Dirty Battlefield"

6. The New Precautionary Approach: A Public Paradigm in Progress

7. Implications of the Contested Illnesses Perspective

Phil Brown is professor of sociology and environmental studies at Brown University. He has been writing about environmental health since the mid-1980s, beginning with No Safe Place: Toxic Waste, Leukemia, and Community Action, which focused on the Woburn childhood leukemia cluster. Since then he has studied many environmental groups and movements and has collaborated with environmental organizations on research. He is editor of Perspectives in Medical Sociology and co-editor of Social Movements in Health and Illness and the Environment: A Reader in Contested Medicine.
Phil Brown is a professor of Environmental Studies at Brown University. He directs the Community Outreach Core of Brown's Superfund Basic Research Program and the Ethical and Social Implications component of Brown's National Science Foundation NIRT project in nanotechnology. His book No Safe Place: Toxic Waste, Leukemia, and Community Action (co-authored with Edwin J. Mikkelsen, Univ of California Pr, Hardcover (1990), Paperback (1997): $21.95) was very successful. It was reviewed in The New York Times Book Review, The Boston Globe, Science, Harvard Law Review, Social Science & Medicine, Journal of Health Politics, Policy and Law, Contemporary Sociology, and New England Journal of Medicine, among others. In the spring of 2002 we published Phil Brown's In the Catskills: A Century of the Jewish Experience in 'The Mountains,' which has sold 2,321 copies so far.