Globalization and the Panics of 1873 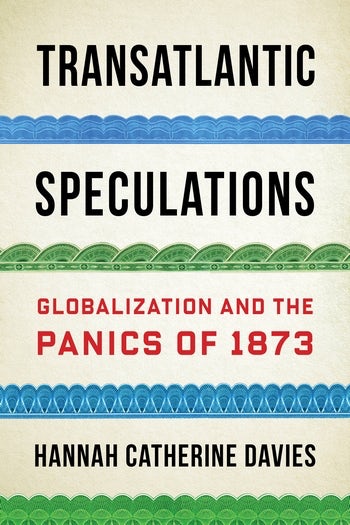 Globalization and the Panics of 1873

The year 1873 was one of financial crisis. A boom in railway construction had spurred a bull market—but when the boom turned to bust, transatlantic panic quickly became a worldwide economic downturn. In Transatlantic Speculations, Hannah Catherine Davies offers a new lens on the panics of 1873 and nineteenth-century globalization by exploring the ways in which contemporaries experienced a tumultuous period that profoundly challenged notions of economic and moral order.

Considering the financial crises of 1873 from the vantage points of Berlin, New York, and Vienna, Davies maps what she calls the dual “transatlantic speculations” of the 1870s: the financial speculation that led to these panics as well as the interpretative speculations that sprouted in their wake. Drawing on a wide variety of sources—including investment manuals, credit reports, business correspondence, newspapers, and legal treatises—she analyzes how investors were prompted to put their money into faraway enterprises, how journalists and bankers created and spread financial information and disinformation, how her subjects made and experienced financial flows, and how responses ranged from policy reform to anti-Semitic conspiracy theories when these flows suddenly were interrupted. Davies goes beyond national frames of analysis to explore international economic entanglement, using the panics’ interconnectedness to shed light on contemporary notions of the world economy. Blending cultural, intellectual, and legal history, Transatlantic Speculations gives vital transnational and comparative perspective on a crucial moment for financial markets, globalization, and capitalism.

This monograph is an excellent alternative to more orthodox cliometric approaches to the 1873 crisis. Highly recommended. Choice

Bringing economic history and cultural history into the same frame, Davies makes a compelling case for the wider significance of the panics of 1873 in the development of a global consciousness of finance. Peter Knight, University of Manchester

This creative global history of the financial panics of 1873 is now surely the leading study of its subject. In tracing not only transnational capital flows, but also the meanings and interpretive frameworks employed to make sense of them, Davies has added a newfound sophistication and depth to the historical study of financial panics. This is global history and cultural history of economy practiced at its finest. Jonathan Levy, University of Chicago

What sense do financial actors make of speculation? This is ultimately the key to understanding financial crises. Ten years after the collapse of Lehman Brothers, Hannah Catherine Davies’s penetrating study of the financial panics of 1873 offers much food for thought. Youssef Cassis, European University Institute

Acknowledgments
Introduction
1. Setting the Stage: Institutions and Cultures of Speculation in the 1860s and Early 1870s
2. The Virtual World of Financial Information and the Making of a Bubble
3. Predicting and Experiencing the Panics of 1873
4. Flows of Paper, Flows of Gold: Theorizing the Panics
5. Capitalism, Conspiracy, Corruption, and the Moral Economy of a Financial Crisis
6. Criminalizing Promoters, Protecting Shareholders
Conclusion
Notes
Bibliography
Index

Hannah Catherine Davies is assistant professor of modern history at the University of Zurich.